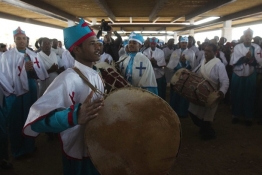 (Photo: Reuters/Ronen Zvulu)Eritrean Orthodox Christian pilgrims chant during a ceremony at the baptismal site known as Qasr el-Yahud on the banks of the Jordan River near the West Bank city of Jericho January 19, 2012.

An Eritrean Christian woman who was tortured in prison has revealed that her faith helped her get through the darkest of times, describing the experience as a “honeymoon with Jesus.”

“When we visited Gabriella at home, she stood up from her seat to welcome us. We immediately saw how much weight she had lost in prison. We could see that she had suffered much. But despite the weakness, Gabrielle looked to us like a soldier who has returned from war victorious. Her joy was very visible and quite overwhelming. We asked her to tell us what she had gone through. Instead of giving a litany of woes, anger or fear, Gabrielle simply said, ‘It was a honeymoon with Jesus!'” shared a group of pastors who visited the woman, named only as “Gabrielle,” according to a press release shared by persecution watchdog group Open Doors.

Gabrielle, along with other Christians, was jailed for participating in an underground church. While the government officially grants religious freedom to some religious groups, such as the Roman Catholic Church, the Eritrean Orthodox Tewahdo Church (which is not recognized by the Orthodox papacy), the Evangelical Lutheran Church and Sunni Islam, are deemed illegal. Christian Solidarity Worldwide has said that as many as 2,000-3,000 Protestant Christians have been jailed for their beliefs.

Gabrielle’s trials began several years ago when she was arrested along with 25 other Christians at a Bible study and prayer meeting at a private residence, and she was first sent to solitary confinement. She was then interrogated and tortured by officers seeking to get her to renounce her faith in Christ – as well as to reveal the names of other Christians who are part of underground churches. The Christian woman refused to do so, however, and even told the officials that she considered it an “honor” to face “all the consequences” for her faith, according to the report.

Officials apparently attempted to trick Gabrielle into denying Christ by telling her that her pastor had recanted his faith, but she saw through the plot. She was then moved to an even harsher incarceration site, where she was kept for a year, before finally being released.

The Open Doors 2013 World Watch List of countries that are the worst persecutors of Christians ranked Eritrea at No. 10, writing:

“All evangelical churches were closed in 2002 following a government ban on religious groups other than Orthodox, Catholic, Lutheran and Islam. The government also persecutes non-traditional Christians, but members of the Orthodox Church also report on evangelical believers, and Muslim extremists are ready to take over where the government leaves off. When Christians are discovered they are arrested and held in shipping containers in military camps.”

Open Doors has reported that at least 31 Christians have died in prison camps there in 2012. An incident in January also led to the arrest of 10 church leaders who served ministries banned by the government – something which Open Doors Media Relations Director Jerry Dykstra called “the start of another wave of systematic persecution.”