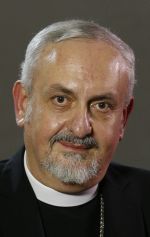 Orthodox Metropolitan Emmanuel of France is the coordinator of Ecumenical Patriarch Bartholomew’s pilgrimage to Jerusalem for the meetings with Pope Francis May 25. (CNS photo/Paul Haring)

ROME (CNS) — The Orthodox bishop who is coordinating the upcoming pilgrimage to Jerusalem by Ecumenical Patriarch Bartholomew of Constantinople said he hopes the patriarch’s May 25 meeting with Pope Francis will give new impetus to efforts for Christian unity.

But he also said the two leaders are likely to discuss a range of common concerns, including the predicament of Christians in the Middle East, conservation of the natural environment, and defense of the traditional family.

“We hope that this will not just be a meeting like others, but we hope that this will give a new horizon for the relations between our two sister churches,” Orthodox Metropolitan Emmanuel of France told Catholic News Service in Rome. “In a divided world, we need unity.”

“Both leaders are very charismatic,” he said. “Both are leaders that look and think beyond what we do and what we think. They have a vision.”

At the same time, he added, “both have their feet down to earth. They feel the need. They are close to mankind.”

Metropolitan Emmanuel, a former president of the Conference of European Churches, said he expected the two religious leaders would discuss the Orthodox-Catholic ecumenical dialogue, as well as matters of “general interest,” including Christians in the Arab world.

The presence of Christians in the region has sharply diminished and grown increasingly precarious over the last decade, following the 2003 invasion of Iraq, the Arab Spring revolts against authoritarian regimes and the Syrian civil war.

The patriarch and pope were also likely to discuss other “questions of common interest,” including environmental problems and “questions of the family,” Metropolitan Emmanuel said.

“We both have the same view regarding marriage as the marriage of a man and a woman,” he explained, noting Patriarch Bartholomew’s 2013 Christmas encyclical in which he stressed children’s need for a mother and father. “And we know very well that the pope is very much concerned about the issues of the family and the foundations on which the Christian family is founded.”

The meeting between the leaders will mark the 50th anniversary of the encounter in Jerusalem between Pope Paul VI and Ecumenical Patriarch Athenagoras of Constantinople. The earlier meeting, which led both churches to lift the mutual excommunications that started the East-West schism in 1054, opened the modern period of ecumenical dialogue.

“We have gone a long way all these years,” the metropolitan said, noting the annual exchange of delegations between the churches, and the large of number of Orthodox and Catholics studying in each other’s religious schools.

The metropolitan acknowledged that substantial challenges to unity remain, particularly the churches’ differing interpretations of the doctrine of papal primacy, but he spoke appreciatively of the overtures by Pope Paul’s successors to their “brothers” in Constantinople.

St. John Paul’s decision to return the relics of St. Gregory the Theologian and St. John Chrysostom to the ecumenical patriarchate in 2004 — 800 years after crusaders brought them to Rome — “was a gesture that was very well appreciated in our church,” the metropolitan said.

Pope Benedict XVI “knew very well the theology of the Orthodox Church,” and continued a collaboration that he had pursued in his years as prefect of the Congregation for the Doctrine of the Faith.

The metropolitan said Pope Francis’ open admiration of the Orthodox conception of synodality as a model for church governance has been “very important” in fostering unity between East and West.

He said an opportunity for greater closeness will arise at the Catholic Church’s upcoming synod of bishops on the family, which will consider, among other topics, the eligibility of divorced and civilly remarried Catholics to receive Communion.

Pope Francis, who has said the predicament of divorced and civilly remarried Catholics exemplifies a general need for mercy in the church today, has noted — though he has not endorsed — the Eastern Orthodox practice of allowing second or third marriages even when the first is sacramentally valid.

“I think this would be an idea that many in the Catholic Church would embrace,” the metropolitan said. “I think that we have a lot to share and a lot to learn from each other.”