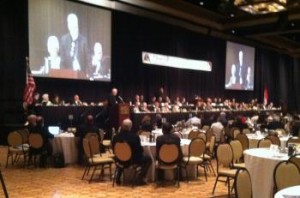 (See below for updates from the conclusion of the Assembly.)

Highlights from the first day of the Assembly included:
– The appointment of convention officers.
– Special presentations by ministries including the Al-Kafaat Foundation of Lebanon,FOCUS North America, Orthodox Christian Prison Ministry, and International Orthodox Christian Charities.
– Granting of degrees by Metropolitan Philip to masters and doctoral degree graduates of the Antiochian House of Studies.
– Reports from more than 20 departments and commissions of the Archdiocese.
One particularly moving moment for all came with the presentation of the report for the Department of Missions and Evangelism by Fr. John Finley. Metropolitan Philip paused the reporting to share his memories and love for the departed founder of the department, Fr. Peter Gillquist, and led those assembled in singing Memory Eternal.

The General Assembly of the Archdiocese concluded on Friday, July 26. The morning began with a heartfelt welcome by His Eminence Metropolitan Philip to His Grace Bishop Louka of Syria. Metropolitan Philip spoke passionately about Syria’s need not for more arms, but for peace. Continuing to emphasize the convention’s theme of charitable service to those most in need, reports were presented by the Fellowship of St. John the Divine, the Department of Charities, and the Order of St. Ignatius.

Metropolitan Philip then presented his message to the Assembly, a deep meditation on the significance of the gathering’s theme, “I was hungry and you gave Me food; I was thirsty and you gave Me drink; I was a stranger and you welcomed Me in; I was naked and you clothed Me; I was sick and you visited Me; I was in prison and you came to Me.” (Matt 25:35-36)

The Assembly concluded in the early afternoon, and included:

– The approval of nine resolutions of the General Assembly, as presented by the Department of Legal Affairs, covering topics including: thanksgiving to the host parish and city of Houston; acclaimations for our visiting hierarchs; support for the Al-Kafaat ministry; support for the sanctity of marriage; concern over the actions of the Patriarchate of Jerusalem; a call for peace in Syria; and recognition for the service of Metropolitan Philip.

– Presentations by the hosts of upcoming Archdiocese conventions, happening in Boston in 2015, and Miami in 2017. Begin preparing to attend now!

– The appointment and election of Archdiocese trustees.

The convention continued Saturday with the grand banquet, and concludes Sunday with the Hierarchical Divine Liturgy.

More from the convention – including an extensive selection of photos, Metropolitan Philip’s message, department and organization reports, resolutions, and more – will be published on Antiochian.org over the coming days and weeks.