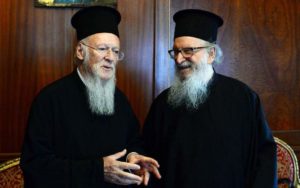 Even though I am no longer active in parish affairs, I am still a member of our Church and its Saint Barbara parish in Sarasota, Florida. I continue to follow with concern the financial, leadership and administrative problems facing our Church.

I have had a 20-year involvement in parish and diocesan affairs while living and working in Indiana. Moreover, back in 2000, I was selected for the presidency of Hellenic College/Holy Cross Greek Orthodox School of Theology (HC/HC) in Brookline, Massachusetts. For various reasons, I declined that position.

The latest debate on the future of the Church and of the Patriarchate is the result of the acceptance speech given by Stathis Valiotis after he was awarded an honorary degree at the recent HC/HC commencement. In defense of academic freedom and freedom of speech, Valiotis, a benefactor of the Church, chose an important occasion to challenge his audience by presenting ideas and suggestions about the future of the Church.

He therefore started a long-overdue discussion about the future of our Church in America and Orthodoxy in general. Even though I do not agree with all of Valiotis’s positions, I am totally opposed to the polemical responses to his speech. We must not kill the messenger for delivering a long-overdue message.

The points raised by Valiotis regarding the Patriarchate, administrative issues within the Archdiocese, and the issue of autocephaly are not new. Over the last 50 years these issues have been raised at various fora and on various occasions.

What is interesting is the timing of the latest debate. It comes in the aftermath of the recent financial problems of the Archdiocese, the maneuvering of the many suitors seeking to succeed our archbishop, even though he has not announced his retirement, and rumors that many of the same individuals may also be interested in the ecumenical throne, even though there is no patriarchal vacancy.

All this at a time when the Patriarchate is under increased pressure by Turkish President Recep Tayyip Erdogan’s new Islamic authoritarianism. Autocephaly will not resolve any of these issues. On the contrary, it will weaken an already troubled Orthodox Church. Earlier autocephaly calls included proposals for the unity of the various Orthodox churches in the US, another Shakespearean “midsummer night’s dream.”

Throughout the 20th century, the Ecumenical Patriarchate benefited from the political and financial strength of the Archdiocese in New York, and from the financial and political support of the Greek-American community.

Back in the 1960s, during another troubled time in the life of this historic institution, Switzerland had been suggested as a proper new home for the Patriarchate. Under Turkish laws, emanating from interpretations of the 1923 Treaty of Lausanne, the Patriarchate will have to abandon in Istanbul all its assets, properties, records and artifacts, never mind its long historical heritage.

Moving the Patriarchate out of Istanbul might protect it from the stranglehold of Turkish nationalism and allow it to carry out its mission unhindered from political pressures, but would deprive it of its historic foundation in the Christian world.

The behind-the-scenes succession “battle” both in New York and in Istanbul has been going on for a while. However, we have yet to hear a word about the vision and the ideas of the prospective “leaders.”

Orthodoxy, particularly in the United States, has been changing rapidly. Adapting and responding to these changes is vital if the Church is to survive and continue its ministry. The needs of the Greek-American community, now in its fourth if not fifth generation, are quite different from what the Church faced a century ago.

Present and prospective leaders are barely addressing conditions created by linguistic changes, the end of migration from Greece and Cyprus, the unique needs of an assimilated community, and the predominance of mixed marriages. Other ethnic communities, like the Jewish- and the Italian-American community, are facing similar challenges and dilemmas.

There is hardly any dialogue with them to find out how they are coping with similar challenges. A highly educated and financially successful Greek-American community will not tolerate for long the Church’s divine right governance structure of a century ago, or the current internal Byzantine political succession games. The days of “Pisteve kai mi erevna” (Believe and do not question) are gone for good. Administrative and fiscal accountability is a must. Otherwise Orthodox parishioners will look elsewhere for spiritual guidance.

They have choices now. Much like the political debates in Greece, contestants for leadership positions in New York and/or Istanbul appear to be far more interested in the “karekla” (chair) than presenting constructive ideas to address the challenges facing Orthodoxy in the 21st century.

Why are our Orthodox leaders not engaging in open and serious discussions on these issues in the Clergy-Laity Conferences? Attempts to revert to Orthodox fundamentalism in order to avoid public scrutiny and accountability (as is the case in many parishes across our country) will fail.

Metropolitans need to rediscover modesty and abandon their inflated egos. Constant appeals for monetary contributions and new mandatory assessments without public accountability will not be accepted by our public much longer.

Metropolitans, theologians, influential members of the laity serving in various archdiocesan bodies, the Greek-American press and other media must engage in in-depth discussions on these important issues and avoid polemic debates if they are truly interested in the future of Orthodoxy in our country.

Theological theories about the divine selection of Church leaders have no place in the 21st century. Why not take a look at the procedures for the selection of the archbishop in Cyprus? That process may not be perfect, but at least it involves input, to various degrees, from the clergy and the laity and encourages future leaders to present their vision of the Church.

Was Valiotis correct to raise the issues he did at the HC/HC commencement? Yes, he was. Hopefully he shook up not only the “leaders” present at the commencement but also future Church leaders who received diplomas that day. If Valiotis managed to do that, he has served the Greek-American community well.

The challenge is now up to us to continue this discussion in religious and lay bodies and seek practical solutions, if we are interested in a revitalized Orthodox Church in the 21st century.