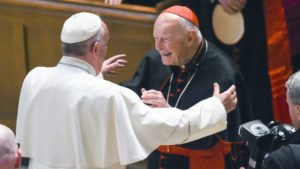 OCL comment: Are there parallels here that apply to the Orthodox Church hierarchy? Should the laity exercise its oversight responsibilities in more meaningful ways to enable changes to take place? Isn’t that the responsibility and role of the laity in the life of the Church?

This is not a banner year for Catholic Church. We learned last month that Theodore McCarrick, former Cardinal Archbishop of Washington, D.C. was an aggressive homosexual. He preyed on seminarians, promoting those who succumbed to his advances, and punishing those who refused them. (His former bedmates he called “nephews,” and they called him “Uncle Ted.” Are you vomiting yet? Read on.)

McCarrick molested an underage boy — and not just any boy. No, it was the son of a family he’d befriended, whom he had baptized as a baby. Roll that around in your head for minute. Imagine holding a baby in your hands, pouring the water of salvation over his head. Watching him grow older, visiting with his parents. Then choosing your opportunity to sexually molest him. This is a work of Satan.

The man who earned that millstone helped pick bishops all across the United States. Names include Cardinal Blaise Cupich of Chicago, Cardinal Tobin of Newark, and Cardinal Kevin Farrell, now running the (cough) Vatican office for Laity, Family, and Life. Farrell shared an apartment with McCarrick for years, but claims he had no idea about McCarrick’s sordid habits. Right. We believe that, don’t we?

McCarrick’s colleagues knew all about his taste for seminarians. Most knew about the legal settlements two separate dioceses made with underage male victims. Prominent Catholic laymen even knew, including William Donohue, of the Catholic League for Civil and Religious Rights. Cardinal Sean O’Malley of Boston knew, but still went on a fundraising cruise with McCarrick to Cuba.

McCarrick Exempted Himself and Other Bishops from Sex Abuse Rules

It has emerged that McCarrick was key in crippling the anti-abuse Charter of 2002, issued the last time homosexual predation swamped the Catholic priesthood. He changed its language to exempt himself, and other bishops, from any consequences. This at a time when two thirds of Catholic bishops (according to the Dallas Morning News) were complicit in cover-ups.

This week, another of McCarrick’s protégés, Cardinal Donald Wuerl of Washington, D.C. proposed yet another panel of bishops, to investigate itself. At that, a nationwide chorus of outrage and bitter laughter erupted from Catholic laymen.

Rightly, they said that any committee convened to discipline these bishops be led by laymen. That’s good, but it doesn’t go far enough.

Laymen Are Not Enough.

Too many Catholic laymen are cowed by a clerical collar to the point where they fawn like old timey English butlers. (“Yes, Your Eminence. Of course, Your Eminence. May I kiss your ring?”)

Too many of the “prominent Catholics” on the A-list who would likely make the committee probably knew about McCarrick. But they said nothing, did nothing. The kind of people who buy tables at the Al Smith Dinner featuring pro-infanticide Barack Obama. Who golf with the cardinals complicit in this squalor…. They would do more harm than good. They’d just be a lay fig leaf on another gay clericalist coverup. The problem, we’ve now learned, extends even to some “conservative” dioceses.

Straightening Out the Priesthood

Unless the Church takes radical steps to undo it, the American priesthood could be swamped by a homosexual subculture, as normal men rightly repulsed by the queenly cabal of cardinals find other uses for their lives.

I have some concrete suggestions. Yes, fast and pray, of course. But we should already be doing that. And it’s not enough. Prayer alone wouldn’t have stopped the Muslims at Vienna or Lepanto, without courageous soldiers and intelligent strategy.

So, let me offer some battle plans for the soldiers out there.

Grab the Purse Strings and Squeeze

So much for the panel. Let’s pray that it issues strong, even draconian recommendations. Catholics should withhold participation in “bishop’s appeals” until those recommendations are put into practice by their bishop. Wealthy Catholics who make major generic gifts to the Church should stop. Today. They should organize a campaign like “St. Escrow’s,” which I floated some weeks ago. Every bishop should see the monies he’d counted on go instead into an escrow account. It will only be released after he opens his books and seminary records to the auditors sent by the laymen, and they are satisfied with his efforts at reform.

What about ordinary lay Catholics, not the moneybags? Remember that 8% of what you give your parish, however faithful, gets taken by the bishop. Start writing personal checks, written out to your pastor. He can spend that however he wishes. No bishop has a claim on it.

A Time to Prune

In order to root out the gay subculture which clearly commands some of the highest echelons of the Church, bishops will have to get much, much stricter, and implement Benedict XVI’s ban on gay seminarians. Seminary classes will dwindle. Some will close. The staffs of entire seminaries where this subculture has reigned? Their Eminences and their Excellencies will need to fire them. Or else St. Escrow’s won’t open its coffers. We won’t get fooled again.

Without organized, relentless financial pressure from faithful laymen, I don’t see bishops making the kind of drastic reforms we need. (Some might still refuse, and subsist on the millions they bring in from federal contracts via groups like Catholic Charities.) But we owe it to Christ to try.

Think of it as setting a small, contained forest fire to stop a much bigger conflagration. If we can’t put out the flames, within our lifetime the American Church could be a vast field of ashes, relieved only by all the millstones.