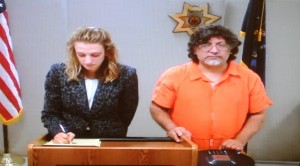 Adam Metropoulos (right) stands next to attorney Kaylee Folster during his arraignment on Wednesday at the Penobscot Judicial Center in Bangor.

By Renee Ordway, Special to the BDN

Community support is often talked about but can be difficult to measure until you need it.

The son of a career military man, Lee Speronis moved a lot, and he has relocated a few times as an adult as well.

In 2003, however, Speronis and his wife, Cathy, and their two children settled in Bangor and have stuck around for the last 11 years. In the past couple of weeks, Speronis has come to appreciate his chosen community more than he thought possible.

Two weeks ago Speronis, president of the St. George Parish Council, received a call from Mark Hathaway, chief of the Bangor Police Department.

The beloved priest of the St. George Church, a small but mighty church in Bangor and the only Eastern Orthodox congregation north of Lewiston, had just been arrested.

“And then he (Hathaway) hesitated for a just a second and said, ‘It’s not good,’” Speronis recalled this week from his office at Husson University, where he works as the director of the school of Hospitality, Sport and Tourism Management.

And, of course, it wasn’t good. The man parishioners called Father, Adam Metropoulos, 52, had just been charged with invasion of privacy for allegedly recording a visitor at his home as she showered and perhaps even worse, a charge of possessing child pornography.

Things would get worse. They generally do when these sorts of revelations surface. There are almost always more.

As Speronis prepared to meet with fellow officers of the church, BDN reporter Judy Harrison called him to let him know Metropoulos had been convicted of second-degree criminal sexual conduct with a minor under the age of 13 in Michigan in 1983.

“Of course, the very first concern is for the kids of the church, including my own kids,” Speronis said.

He immediately called the church diocese, the Metropolis of Boston, and the Bishop suspended Metropoulos within two hours. The diocese is ensuring that services continue, sending others to Bangor to lead services and to help the parish heal.

Business is being taken care of, but Speronis, the nearly lifelong wanderer, has discovered the importance of the emotional support of community.

“It has been humbling beyond belief,” Speronis said this week. “Right after this was released, I had a board meeting for the (American) Folk Festival and received so many words of support and hugs and understanding,” he said.

He has experienced it everywhere — in restaurants, coffee shops, grocery stores, at work and on the streets.

Our community is familiar with the grim, disheartening feelings that result when it is discovered that a well-loved and respected member may have a terrible, dark and criminal secret.

Many of us went through the same sentiment and faced the same internal questions after Robert Carlson, former pastor of the East Orrington Congregational Church and president of Penobscot Community Health Care, jumped from a bridge three years ago amid an investigation he had been sexually abusing young boys for decades.

During a discussion about Metropoulos, Speronis called him “Father” out of habit, then caught himself and said “Adam.”

With a lot of emotion on his face, he said, “I’ve got to get used to that, calling him Adam, because he is not a Father anymore. It’s very much like a death. The man I thought I knew? Turns out he didn’t exist, and for many of us it’s like mourning the death of that person.”

Community members and other religious organizations, churches and synagogues have responded.

“Notes, visits, phone calls, emails, just a pat on the back or a hug — so many have reached out and let us know that they care about what we are going through. Our parish has been placed on prayer lists throughout the Bangor area. We’ll be OK and in no small part because of that support and comfort,” he said.

That is a true measure of a community’s strength, and Speronis is pleased to call it home.

Renee Ordway can be reached at [email protected].