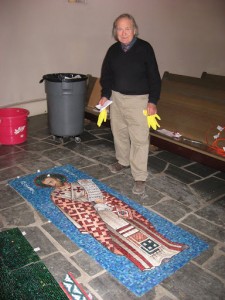 I wish to thank and commend The National Herald for calling the attention of its readers to the work of the internationally-known iconographer, Sirio Tonelli, through its recent article describing the work the Tonelli Studio is executing for the newly dedicated church of the Dormition of the Theotokos in Southampton, NY (Nov. 9).

Your description of Tonelli as “an artistic renaissance man imbued body and soul in Byzantine iconography” is not only accurate but is also one regularly appreciated by Greek Orthodox Christians attending the many churches you mention that are adorned by his work. But for a religious experience equal to any evoked when standing before well-known mosaics existing in Greece, Turkey, or Ravenna, one has only to visit the St. Sava Serbian Orthodox Cathedral in Milwaukee, WI, where Tonelli and his staff have produced what the Milwaukee Journal-Sentinel described as “the most extensive and elaborate church mosaics in America.”

In an article published at the time of the completion of the Cathedral’s interior, the newspaper wrote, “After more than three million dollars and nearly thirty five years of gradual fund raising and installation, final touches were made this month (May 2004) in the countless Italian-glass mosaics that cover virtually every inch of the walls, ceiling, and dome of Milwaukee’s St. Sava Serbian Orthodox Cathedral.”

While I am pleased that Fr. Alex Karloutsos and his parish have embarked upon the task of bringing the genius of Tonelli to worshipers in their midst, I urge anyone who happens to be anywhere near Milwaukee to visit the Cathedral of St. Sava. Those who do will be rewarded by a viewing experience unlike any other.