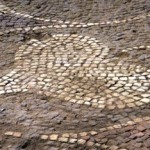 The church walls will be cleared inside and outside, and the layout of the structure will be mapped soon, according to the Isparta Museum director Mustafa Akaslan. AA photo

ISPARTA – The ruins of a church and mosaics discovered in illegal excavations in Isparta will be prepared for visitors. The remains are believed to be from the late Roman and Byzantine period and expected to attract faith tourism

Excavations are being competed on an early basilica and mosaics that were discovered two months ago during an illegal excavation in the southern province of Isparta’s Kaletepe region.

Provincial Culture and Tourism Director Abdullah Kılıç told Anatolia news agency that the illegal excavations had been done by the gendarmerie, followed by rescue work. “During these excavations, we found the ruins of a church and mosaics that are believed to date from the late Roman and Byzantine periods,” he said.

Isparta Museum Director Mustafa Akaslan said 90 percent of the walls of the structure had been unearthed. “In the Byzantine period, churches began to be constructed as religious structures in the basilica style. This is a Byzantine church with a basilica layout and three naves. Mosaics are in the middle of the basilica.”

He added that during the excavations in the area, they had unearthed a narthex on top of a rock and a church with three naves in front of the narthex.

Akaslan said they had found a kiln in the structure that may have been used during a recent period. “This kiln and illegal excavations are the main reasons for the loss of stones in the structure.”

Kılıç said they had not carried out detailed work on the mosaics yet. “The first data shows that we mostly have geometric motifs. In coming years we plan to open them to visitors after completing restoration work and providing for their protection, because this one of the largest churches that we have found in the region. Its roof tiles are from the late Roman, Eastern Roman and early Byzantine periods.”

The site would attract faith tourism, Kılıç said. “Turkey is home to many structures from various civilizations. One can see the legacy of all these civilizations.”

He said they wanted to open the rich historical artwork to the public once the excavations were completed. “When the excavations are finished, we are planning to exhibit the mosaics inside the church with other structural stones.”

Excavations had begun July 9 and were slated to be completed Oct. 20.