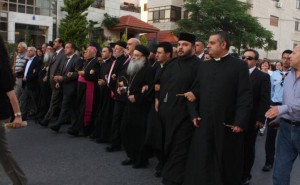 2000 Christians march through the Jordanian capital

AMMAN – On Tuesday, May 21, about 2000 Christians marched through the Jordanian capital with candles in hand, in a silent march to demand the release of the two Metropolitans of Aleppo – the Syrian Orthodox Archbishop Gregorios Yohanna Ibrahim and the Greek-Orthodox Archbishop al-Boulos Yazigi – one month after their abduction.

H.E. Bishop Maroun Laham, Patriarchal Vicar for Jordan of the Latin Patriarchate of Jerusalem told Fides “that all the Christian Churches joined in the march.” The route went from the Greek Orthodox Cathedral in Amman to the Syriac Orthodox Cathedral passing by the Latin Catholic Church of St. Mary of Nazareth. His Excellency, Bishop Maroun Lahham read a statement, signed by all the bishops and heads of local Churches and ecclesial communities, which strongly condemned the kidnapping of the Archbishops who are “two of the most significant Arab Christian personalities of our time.”

The declaration calls us to pray to “the Almighty Lord so that calm and stability may be restored to beloved Syria.” The statement also calls for “respect for the Holy Places, especially in East Jerusalem.” Fearing that Jordan may be plagued by its neighbor’s conflicts, the Assembly of the Heads of Churches in Jordan raises its prayers to the Almighty to “bless the Hashemite Kingdom of Jordan and that we cherish the gift of stability, security and precious national unity under the leadership of His Majesty King Abdullah II Ibn Al Hussein.”