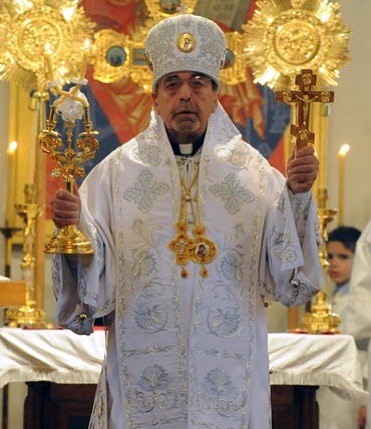 Southbridge, MA [OCA] His Eminence, the Most Reverend Nikon, Archbishop of Boston, New England, and the Albanian Archdiocese, fell asleep in the Lord on Sunday, September 1, 2019.

Archbishop Nikon was born Nicholas Liolin in New York on October 9, 1945 to a pious Orthodox family.  He pursued his elementary and secondary studies in New York City, where he developed an abiding interest in the theatre arts, securing leading roles in several high school productions, and in the biological sciences. Tonsured to the Order of Reader by Metropolitan Theophan (Noli), he studied at St. Vladimir’s Orthodox Theological Seminary, Crestwood, NY; Iona and Concordia College, New Rochelle, NY; and the New School for Social Research and Political Science, New York City, NY.

Reader Nicholas graduated from St. Vladimir’s Seminary in 1966. In 1967, he married the former Sarah Arthur, his childhood sweetheart. Together they shared a ministry in which she devotedly served as choir director after his ordination to the Holy Diaconate by the late Bishop Stephen [Lasko] on July 5, 1969, and to the Holy Priesthood the following day. Father Nicholas and his wife Sarah, served St. Nicholas Church, Southbridge, MA, and St. Thomas Church, Farmington Hills, MI for more than thirty years. During his years of pastoral ministry, Father Nicholas was well known for his pastoral acumen and broad-based ministerial sensitivity and experience.

In addition to his pastoral ministry, Father Nicholas served as President of the Greater Detroit Council of Orthodox Churches and Chaplain for the Wayne State University Orthodox Christian Fellowship.  He is also credited with administering a health and hospitalization insurance plan for area clergy.  He also appeared on numerous live television and radio programs, broadcasting to the faithful and those interested in the Orthodox faith.  Notably, he was a project coordinator for “The Voice of Orthodoxy,” established by New England’s Russian Orthodox Layman’s League, and he served as editor of “The Vine,” the newspaper of the Albanian Archdiocese, and Dean of the Great Lakes Deanery.

On July 25, 2000, his wife, Sarah, reposed in Father Nicholas’s arms following a bout with cancer. His Beatitude Metropolitan Theodosius presided at her funeral. It was Father Nicholas’ excellence as a pastor, and parish administrator that lead the Holy Synod of Bishops to consider him for future leadership in the church.

Following the repose of his wife Sarah, Father Nicholas spent an extended period of time at St. Tikhon’s Seminary and Monastery, South Canaan, PA, extending his studies, where he was tonsured to monastic orders prior to his episcopal election and consecration as Bishop of Baltimore on Friday and Saturday, May 24 and 25, 2002 at St. Tikhon Monastery.

Bishop Nikon was nominated as Bishop of Boston at the Albanian Archdiocesan Assembly on October 10, 2003, and the Holy Synod elected him Bishop of Boston on October 22, 2003.  He served as administrator of the Diocese of New England and was elected ruling bishop during the fall session of the Holy Synod in October 2005.  He was installed with a new title as Bishop of Boston, New England and the Albanian Archdiocese by His Beatitude Herman at Holy Trinity Cathedral in Boston on December 16 and 17 2005.  As diocesan bishop,  Archbishop Nikon quickly established himself as an excellent pastor to the clergy and their families under his care, as well as a keen shepherd to the faithful of the Albanian Diocese and the Diocese of New England.  His Eminence was especially dedicated to ministry to college students. Often he would drop in unannounced to OCF meetings at the University of Connecticut and other chapters in his dioceses, providing in person support for the ministry, and taking the time to be pastoral present with the students. His Eminence served as locum tenens of the Diocese of the South from February 2011 until March 2015.

Archbishop Nikon was elevated to the rank of Archbishop on May 9, 2012.

His Eminence will be interred in Michigan where he will be laid to rest next to his wife Sarah.

May Archbishop Nikon’s memory be eternal!

Share. Twitter Facebook Pinterest LinkedIn Tumblr Email
Previous ArticleInteresting Developments at the Meetings of the Synods of Constantinople and Moscow
Next Article GREEK METROPOLITAN NEKTARIOS OF CORFU: WE RECOGNIZE ONLY THE CANONICAL UKRAINIAN CHURCH (+ VIDEO)