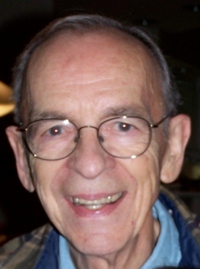 Basil “Bill” Foussianes cherished his family and his church, going to any length to serve both. He wanted nothing more than to see his children succeed, build their own families, and enjoy life. He loved lively conversation, had many lifelong friends and possessed a wonderful sense of humor and appreciation of life. He died peacefully with his wife of 57 years, Irene, and children by his side in Naples, Florida on December 12, 2012.

Bill Foussianes was born on July 4, 1922 in Toledo, Ohio to Constantine and Vasilike Foussianes. He lost his father at an early age, but not before he had been taught the value of education and a strong work ethic. He loved his mother very much and took good care of her until she passed in 1988.

Bill enlisted in the Air Force during WWII in October of 1942 while he was enrolled in the Chemical Engineering program at the University of Toledo. After his discharge from the service as a 1st Lieutenant, he finished his bachelor’s degree and enrolled in the University of Toledo’s Law School, putting himself through school by teaching and by working part-time in the laboratories at Owens-Illinois.

The Greek community in Toledo was relatively small and although he was a few years older, he had known Irene Tokles for some time. They married on April 30, 1955 and moved to Detroit shortly thereafter when Bill joined Barnes, Kisselle, Raisch and Choate as a Patent Attorney. He loved his work and stayed with the firm for over 40 years, eventually becoming senior partner.

Most important to Bill was his family. He was father to Dean(Lauana), George(Frances), Christine Lenz(Jeffrey), and Nicholas(Lisa). He was grandfather to Anne, Chloe, Jack, Quinn, Theodore, George, and Sophia. He had a brother, George, who died shortly after birth in 1924.

He talked often about the frequent visits his children and grandchildren made. He loved seeing his grandchildren and watching them grow. More recently, when he had trouble communicating, he would still look at them with the biggest smile on his face and loved it when they just sat near him and kept him company.

Bill was actively involved in the organization and development of the Greek Orthodox Church initially at a local level and eventually at a national level where he worked actively with Archbishop Iakovos on various matters for over 30 years, and was named an Archon of the Ecumenical Patriarchate. This work was deeply satisfying for him and allowed him to utilize his organizational and communication skills to bring different constituencies together. He was also a member of the General Board of the National Council of Churches, the Board of the Hellenic College, and the Michigan Patent Law Association – serving as President in 1971.

Bill was the first person to suggest that the University of Michigan Athletic Department consider registering the trademark for the “Block M” when his son George was playing baseball there. Bill donated his services to register the trademark for the school. As a token of the University’s appreciation, the school offered to fly him on the team plane out to Pasadena for the Rose Bowl in 1981. In his typical modest fashion and much to the disappointment of his children, he declined.

Funeral Monday 11:00am at Holy Trinity Greek Orthodox Cathedral, 740 Superior Street, Toledo, Ohio. Visitation at the cathedral begins at 10:30am.