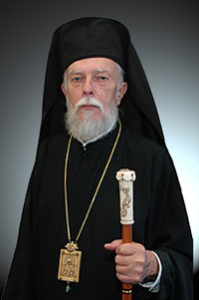 Bishop Mark fell asleep in the Lord on Monday, January 8.

Born in Detroit, MI on April 2, 1934, Bishop Mark was ordained as a Melkite Greek Catholic deacon and priest in 1964.  The following year, he was received into the Orthodox Church.  While pursuing studies at Saint Vladimir’s Orthodox Theological Seminary, Yonkers, NY, he served Saint George Antiochian Orthodox Church, Albany, NY and later Saint George Antiochian Orthodox Church, Wichita, KS.  After his reception into the Romanian Episcopate of the Orthodox Church in America, he served Saint Thomas Church, St. Louis, MO and Saint George Albanian Orthodox Cathedral, Boston, MA.  He was elected to the episcopacy in June 1979 and consecrated on November 10, 1979 to succeed His Grace, Bishop Stephen [Lasko] as Bishop of the OCA’s Albanian Archdiocese.  In 1984, he was named Titular Bishop of Bethesda.  In March 1985, he was elected Bishop of Fort Lauderdale and Auxiliary to His Grace, Bishop [later Archbishop]Dmitri of Dallas and the South, a position he held until he again was named Titular Bishop of Bethesda in March 1991.  He had also served as Administrator of the Diocese of the Midwest for a brief period in the late 1980s.  He was granted retirement on March 21, 2001 with the title of Former Bishop of Boston.

May Bishop Mark’s memory be eternal!