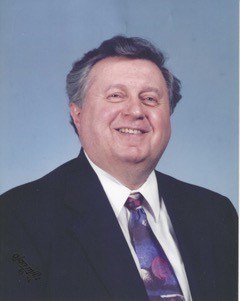 Born in 1928 in Sharon, PA, John was the son of immigrant parents from Romania. His parents owned the LyJor (named for his parents Lydia and John Regule) Gas Station, Hotel, and Restaurant Bar in Sharon. After graduating from Sharon High School (PA), Westminster College (PA), Bachelor of Arts, and the University of Pittsburgh (Juris Doctor), he was drafted into the U.S. Army and served at the end of Korean War in the Judge Advocate Corps. John then returned to Sharon, PA to serve as attorney-at-law for the next fifty-six years. He shared his practice with his brother Andrew, also an attorney, using the offices of the then-closed Hotel and Bar. John had a strong belief and commitment to serve the local community. Over the years he served as Public Defender for Mercer County, the Solicitor for the city of Sharon, an Adjunct Professor at the local campus of Penn State, and towards the end of his career, as Master of Mercer County Domestic Relations Court. All throughout, he was involved in countless organizations in and around the Shenango Valley, one of which was his beloved Lions Club in Farrell.

Some of John’s proudest and most notable achievements were in his devotion to the Orthodox Church. John donated his time as an attorney, serving as counsel for the Romanian Orthodox Episcopate of America for over 60 years. He was the National President of the American Romanian Orthodox Youth (AROY) and president of the Orthodox Brotherhood of America. As a strong supporter of Orthodox Christian unity in America, he also served as the founding president of the Shenango Valley Orthodox Men’s Society. John was a life-long member and past Parish Council President of Holy Cross Orthodox Church in Hermitage, PA. He was also one of the founders and member of the governing board of the Orthodox Monastery of the Transfiguration (Ellwood City, PA) where he will be laid to rest next to his beloved wife, Elizabeth (née Lupu) of 59 years. John also served as an Advisory Board Member of Orthodox Christian Laity. After the fall of communism in Romania in December of 1989, John became an ardent supporter of aid for the people and the church in Romania through the initiatives, Help for Romania, and the Congress of Romanian Americans (CORA). In addition to advocating for the Romanian people, he helped arrange and supervise donations from churches in the United States to churches, hospitals, and orphanages throughout Romania. John also served as an Advisory Board Member of Orthodox Christian Laity.

After retiring, John and Elizabeth moved to The Villages, FL. They enjoyed ushering at the Sharon (formerly, the Church on the Square) and Savannah Performing Arts Centers, volunteering at Operation Shoebox, singing and reading the Epistle at church and working at the yearly festival at St. Mark Greek Orthodox Church in Belleview, FL; playing bridge with other couples and visiting with friends in the nearby Calumet swimming pool. Although transplanted Floridians, they remained loyal Pittsburgh Steelers and Ohio State Buckeye fans.

John was preceded in death by his beloved wife, Elizabeth (Veta); his mother and father, Lydia and John Regule of Sharon, PA; his brother and law partner at Regule and Regule Law Offices, Andrew; and his sister, Vera Hoyt of Hermitage, PA. He is survived by his sister, Eleanor of Fort Myers, FL, and many dear cousins, nieces, and nephews as well as his children and grandchildren.

John will be remembered by many for a variety of things, not the least of which include his “dad” jokes and special secret handshakes. He will also be remembered as a man of integrity and a man who was devoted to his church, his family, and his friends.