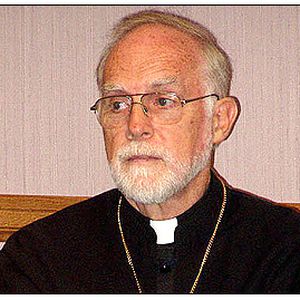 Originally published on December 2, 2009, as part of the Life in Christ column.

Celebration of Christmas, the Nativity of our Lord, invites us to look in a fresh way at the intimate relation that exists between the Incarnation of Christ and his “Second Coming” in glory. Too often Nativity is taken as a feast in and of itself, a family festival so deformed by the season’s commercial pressures that two of its major emphases, cosmic and eschatological, become lost in a haze of “good cheer” and tinsel.

One way to recover those emphases is to return to the biblical image of the cosmic Christ so strikingly re-conceptualized by the French Jesuit paleontologist and theologian, Pierre Teilhard de Chardin (+ 1955). This Roman Catholic scientist and mystic, marginalized by a Magisterium that simply did not understand what he was talking about, provides insights into the mystery of Christ’s Incarnation and Parousia that are more in keeping with Orthodox than with Latin teaching.

As a scientist in a post-Darwinian world, Teilhard conceived the history of the universe as a vast movement of “convergent evolution” that involves the progressive spiritualization of matter, including human life. Basing his interpretation on scientific observation of existing phenomena, he saw creation as progressing through phases he identified as cosmogenesis, biogenesis, and anthropogenesis or “noogenesis,” with increasing complexity of consciousness in all forms of material reality. In its final phase, human consciousness “folds back upon itself,” becoming self-reflective, thus able to conceive of and welcome the End of history in Christ’s Second Coming in glory. Here, humanity and the cosmos as a whole reach their apex at what he termed the “Omega Point,” a final pole of irreversible convergence or consolidation. Flannery O’Connor reflects this notion with the title of the first in her marvelous collection of short stories, “Everything that rises must converge.” Teilhard’s basic vision is expressed in biblical language by St Paul’s understanding of the cosmos as “groaning in labor pains” until now, moving nevertheless toward its ultimate fulfillment through the mediation of Christ, when the Son will submit himself with the whole of creation to the Father, so that God might be “all in all” (Rom 8; 1 Cor 15).

Many critics have charged Teilhard with “pantheism.” To the contrary, although he emphasizes the progressive unification of all things, including “human monads,” he insists that this process preserves personal distinctiveness (“L’union différencie,” he declares in L’Énergie humaine, 1937). Likewise, the culminating Point or Term remains personally, ontologically unique. That point, he concludes, possesses its own personality, and, since it draws all things toward Itself, it must by its very nature be “absolute, incorruptible, divine.”

From this reflection, grounded in observation of the physical world, Teilhard moves on to develop a thoroughly “cosmic Christology,” in which all of creation is seen to center on the divine Person of the Incarnate and Risen Christ. Alluding to apocalyptic passages of the New Testament, he laments the fact that most people read them as unforeseeable and arbitrary disasters, whereas they should be read as imaging a culminating stage of development in the cosmic movement toward the ultimate dénouement at the Parousia. Again calling on biblical language, Teilhard speaks of the “birth pangs” through which creation must pass (cf. John 16:21; Rom 8:18-23), in order to find liberation from death and corruption. Christ necessarily had to participate in that movement, to destroy the power of death and to open the way toward a “new creation.” Through this saving action mankind attains the full maturity St Paul speaks of in Ephesians 4, maturity marked by unified self-conscious reflection, leading to full participation in—but in nowise confusion with—God, a process of spiritual growth known in Orthodox tradition to culminate in “deification” (theosis) or participation in divine life. This union of mankind in a kindred spiritual consciousness is most fully manifest in the Body of the Church, the Body of which Christ is both the Head and the End or ultimate fulfillment.

The Incarnate Christ is thus the Cosmic Christ; the two aspects of his life and work cannot be separated. Accordingly, the significance of the Child in Bethlehem is only fully understood in terms of his Return in glory, when the work of redemption will lead human existence and all of cosmic reality into ever fuller participation in the life of God.

Redemption in this perspective is less juridical, dealing with the problem of sin and guilt, than it is ontological. Through his sacrificial death on the Cross, Christ effects conditions that can lead persons to the transformation “from one degree of glory to another,” which the apostle speaks of in 2 Cor 3. Redemption, in Teilhard’s view, is thus cosmic, involving the creation as a whole from Alpha to Omega. It embraces the initial creative act (“the Big Bang”), is brought to its realization in time and space through incarnation of the God-man, and achieves its end with the Parousia. The Parousia, in this perspective, is seen not as a catastrophic end to history, but as an organic relation between heaven and a humanity biologically drawn to a critical evolutionary point of collective maturation. That biological development, however, leads to a spiritual transformation grounded in Christ’s death and resurrection. In dying “the death of the World,” Teilhard states, Christ destroyed death: “He gave death physically the value of a metamorphosis. And with him, through death, the World has entered into [the life of]God” (Mon Univers, 1924).

Teilhard points out that the Logos-christology of St John’s Gospel is cosmic and universal; yet it reflects the ancient view of the cosmos as static. In light of our evolutionary understanding of the world, the Logos must be seen as more than the organizing principle of a static universe. He is rather the “evolutionary principle of a universe in movement.” And the end, the finality, of that movement is the New Creation brought into existence by the mediatorial work of Christ, who leads that creation to its eternal destiny.

Christ’s Nativity thus prepares for the Eschaton, the Parousia or ultimate fulfillment of all of God’s creative work. Teilhard’s way of expressing the movement leading to that fulfillment will not satisfy everyone, and his mingling of scientific and mystical language may simply confuse or annoy. But we are greatly in his debt for bringing us back to a biblical perspective in which all of God’s creative and redemptive work comes together to orient human persons and creation itself toward its ultimate goal of theosis, eternal participation in divine life.

If we listen to him attentively, it is no longer possible for us to atomize our liturgical celebrations into distinct and virtually unrelated rituals. Nor can we live our lives on a treadmill, with the workweek phasing into relaxation on Saturday, then church on Sunday before we return to work on Monday (what the French refer to as “metro-boulot-dodo”). That contemporary version of the “eternal return” is once and for all replaced by another vision, another hope: the hope and certainty that life does have meaning, and that we are united with one another and all of creation in an irreversible movement of transformation that will lead us, and all things, from glory to glory.

Edited by the Very Rev. John Breck, this bi-monthly series began in 2002 and offered commentaries and observations by Fr. Breck and other authors. The first two installments offered reflections on life after the September 11th tragedies and on the debates surrounding embyronic stem cell research.

Share. Twitter Facebook Pinterest LinkedIn Tumblr Email
Previous ArticleSaint Athanasius on the Reasons for the Incarnation
Next Article Patriarchs and Heads of Churches in Jerusalem release “Statement on the Current Threat to the Christian Presence on the Holy Land”