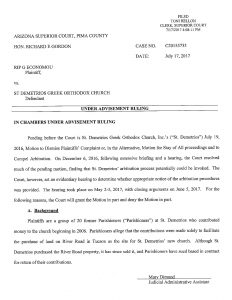 You may be interested in this ruling from the Tucson Court…. a case where a US Court upholds the well settled doctrine: “So long as a court does not cross into ecclesiastical matters, it is appropriate to apply neutral legal principles, including those based in contract, in resolving a dispute involving a religious organization.”

If the New York courts had followed this doctrine in the Declaratory Judgment action filed challenging the imposition of the 2003 Charter by the EP without the approval of the Clergy-Laity Congress in accordance with the revision provisions of the previous Charter the GOA would not be in the situation it is in today. The argument Plaintiff’s made in the Charter controversy was that the previous Charter, which had been agreed to and approved by both the Patriarchate and the Archdiocese through the Congress constituted a contract whose revision provisions requiring assent by both the Congress and the Patriarchate could not be unilaterally abrogated by the Patriarchate.

It appears that the Ecumenical Patriarchate is at it again.  Archbishop Demetrios and seven of the eight members of the Eparchial (US) Synod chose Bishop Sevastianos to replace the late Metropolitan Iakovos of Chicago as the new Metropolitan.  The Ecumenical Patriarchate has decided to “change the procedure” after-the-fact, and is adding new names to the list of eligible candidates and asking Archbishop Demetrios and the Eparchial Synod to “vote again.”

By showing his disrespect for the decisions of his American Eparchy, Patriarch Bartholomew risks losing the support not only of the faithful in the parishes, but the support of the major donors of the Archdiocese of America such at FAITH: The Endowment for Orthodoxy and Hellenism and Leadership 100.  Perhaps the Patriarch believes that he needs to show everyone that he has “absolute power” over his colony in America.  Hopefully he will reconsider and back away from this “crisis” of his own making.

Lord Acton is the one who is credited with the saying: “Power corrupts, and absolute power corrupts absolutely.”

In Measure for Measure, Shakespeare has Isabella denounce the Duke’s deputy for being corrupted by power: “It is excellent to have a giant’s strength, but it is tyrannous to use it like a giant” (1623).

And, finally, there is this:

“He who troubles his household shall inherit the wind, and the fool will be servant to the wise.” Proverbs 11:29.