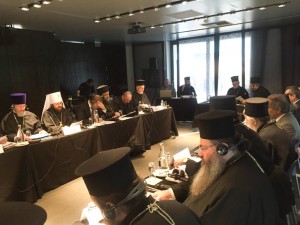 Without unanimity ended the Special Inter-Orthodox Committee session on the preparation of the Great Pan-Orthodox Synod of the Church, held these days in central Athens hotel.

Information Romfea.gr said the Thursday session December 17 there were tensions and obstacles, made the occasion not solve several issues concerning the preparation of the draft Rules of organization and operation of the Holy and Great Council.

According to participants, Dealers Orthodox Churches have expressed disagreements that threatened to blow up, the necessary unanimity considered sine qua non condition for the smooth functioning of the Great Council.

Among the dissenters was and the Delegation of the Patriarchate of Antioch, which among other things said that if during the Great Synod leave a church and not sign the Synod to dissolve and is void for lack of consensus.

Please note that representatives of the Ecumenical Patriarchate and other churches delegations, paid superhuman efforts to reconcile the opposing points of view and find the common ground that will make after so many decades of efforts the Holy and Great Synod reality.

However today, Friday, December 18 is expected the joint communiqué of the Special Committee, which will be signed by all the delegations.

Share. Twitter Facebook Pinterest LinkedIn Tumblr Email
Previous ArticleSPECIAL INTER-ORTHODOX COMMITTEE FOR THE PREPARATION OF THE PAN-ORTHODOX COUNCIL BEGINS ITS WORK IN ATHENS
Next Article Why these Americans are ‘done’ with church, but not with God