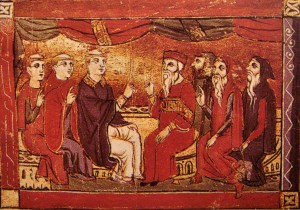 In 1204, Norman, Venetian, and other European forces heeded the call of Pope Innocent III for a Fourth Crusade to take back the Holy Land from the Muslim conquerors.  In a bizarre chain of events brought on primarily by a lack of funds, a deal with an ousted prince of Constantinople, and a fair smattering of greed, most of the Crusaders never made it to the Holy Land, but instead captured the city of Constantinople and large portions of territory of the Roman Empire – including the islands of the Mediterranean.  An earlier agreement amongst the Nobles stipulated how the wealth and the lands were to be divided among the Crusader Nobility.  They enthroned one of their own as a new Byzantine Emperor and a Roman Catholic cleric as the new Patriarch of Constantinople   The Orthodox Christians were to surrender their heretical ways and recognize the Pope of Rome as their head and to become good Latin Christians subject to new Latin bishops and priests.[i]  (The occupation lasted less than sixty years until forces of the Empire recaptured Constantinople and took back the thrones of the Eastern Roman Empire and the Eastern Orthodox Patriarchy).

This proved, however, easier said than done.  The Latin clergy met with resistance:  sometimes with acts of violence from both sides, but often by simply ignoring the Latin clergy and continuing to give preference to their own Orthodox religious leaders.  Especially in the outer regions of the new empire and the Mediterranean islands of Cyprus and Crete, the Latin clergy found it easier to be accommodating and “look the other way” as long as they could still be nominally in charge.  In their areas of control, the Venetian leadership (primarily the sea ports and the islands) fostered a great deal of leniency between the Orthodox Christians and the large contingent of Venetian colonists – the Venetians tended to be more loyal to their trade interests than to the Latin Pope.

During the period following the sack of Constantinople and continuing up to pre-modern times, there occurred an interesting development (especially in the island regions).  The Christian populations (laity and clergy) realized that neither was going to go away or be completely absorbed by the other. Facing that reality and not wanting to live in constant turmoil, they developed a plan.  We do not know how it came into being or what locality was first, but there is evidence that some churches shared a building for both Latin and Orthodox services.  “In many Greek islands there were also mixed churches, with parallel naves and two adjacent sanctuaries, one for the Greek, and the other for the Latin rite.”[ii]  While an Orthodox congregation was celebrating the Divine Liturgy in one sanctuary, a Latin congregation the Latin Rite Liturgy on the other side of the same building (combined coffee hour afterwards?).

What has this to do with the modern Orthodox Church in America?  I think the example presented by the churches in the Mediterranean islands provide us with an interesting solution for the Pan-Orthodox Church in America, but does not necessarily include merging with the Church of Rome (which would be wonderful, but after 1,500 years it’s not likely and we should get over it and move on).

Here’s the thing:  Old World Orthodox parishes in America are dwindling.  There are some old, rather large edifices that are now underused and expensive to maintain.  There are many parishes with very small populations (old neighborhood cultures where the parishioners and/or their children long ago moved away.  There are newer mission parishes that are struggling to get off the ground.  At some point, there will be a culturally American designed group to attract the Christian converts and the kids of the Old World parishes.  Many – if not most – of these parishes are having difficulty paying their priests what they deserve, maintaining the facilities, and keeping up with a cycle of services.

The reality is:  Most Orthodox Christians want to unite.  However, some do not want to give up the cultural based services they have grown up with (perhaps in the language they grew up with), nor should they. Also, more protestants are becoming interested in the Orthodox Church but are not interested in the Old World cultures (as wonderful as they are) – and not especially attracted to the Western Rite (as wonderful as that is).

Solutions:  While we wait for the hierarchs (both Old World & New) to develop a plan for unity in the American Orthodox Church, there can be a Pan-Orthodox plan to merge parishes and have multiple services in a shared facility.

For a Eucharist to be valid do the Jurisdictions have to be separated by so many miles, or blocks, or feet, or patches of grass?  Can’t they merely be separated by a wall or an upper/lower level of the same building?

The obstacles are not ecclesiastical.  They are “people” obstacles. Overcoming the obstacles will require people talking to each other, trusting each other, and working to overcome any issues (who owns what?; who pays for what?; who is responsible for what?).  These “people” include parishioners, Priests, Bishops, and Primates – the Body of Christ.

We must work together now to ensure that there is an Orthodox Christian presence in America beyond the next 50 to 100 years.

[i] Phillips, Jonathan, The Fourth Crusade and the Sack of Constantinople, (New York:  Viking Penguin, 2004).

Editor’s Note: Will the future of Orthodox Unity in the USA come about because dwindling church attendance within jurisdictional churches in the same area result in merges of parishes? It is happening. Johnson City, Tennessee is an example. GOA and Antiochian parishes have merged.