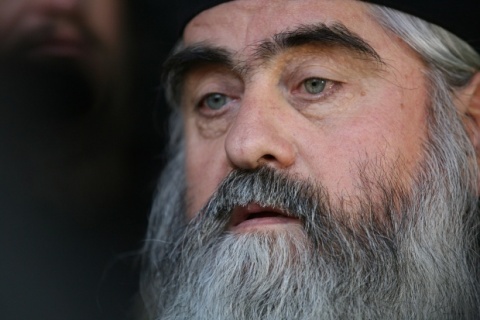 On November 10, Varna Metropolitan Kiril received support from 7 of the 12 attending metropolitans in a secret vote, making him the interim head of the Church. Photo by BGNES

The unity of the Holy Synod and of the Bulgarian Orthodox Church is the most important issue for Orthodox Christians in Bulgaria, according to Varna Metropolitan Kiril.

Kiril made the statement Sunday in the Bulgarian capital during his very first mass as Sofia Metropolitan and interim Patriarch.

“When opinions differ, each must be well-grounded. I hope that all metropolitans will attend the next meeting of the Holy Synod and that those who would be absent would provide excusable reasons for it. They have all made an oath to respond to the invitations of the Synod,” said he, stressing that 11 of them already recognize his election.

During the mass Kiril spoke about the effort of late Patriarch Maxim to achieve unity of the Church, his success in leading it through the most difficult times of atheism and schism, and called on all bishops to follow Maxim’s example.

The Sofia bishopric greeted Kiril with flowers and pledged to never forget the work and life of the late Patriarch.

On Friday, the Holy Synod decided to send letters to three metropolitan bishops to urge them to attend all its “winter” sittings, which will conclude on December 19.

The announcement was posted on the official site of the Bulgarian Orthodox Church.

The three missed the November 14 meeting of the Synod, along with Vratsa Metropolitan Kalinik, the Metropolitan of America, Canada and Australia, Yosif, and the Western European Metropolitan, Simeon.

The Synod reminded the absentees that Article 54 from its Code mandates the bishops to attend the sittings except in cases of excusable emergencies.

Kalinik and Ignatiy have submitted doctor’s notes for illness and for this reason will not receive a letter. Ignatiy has notified the Synod he was to join them by the end of November. Yosif has informed he would be in Bulgaria on November 19 to attend the sitting, but Simeon declined citing health issues.

On November 10, Varna Metropolitan Kiril received support from 7 of the 12 attending metropolitans in a secret vote, making him the interim head of the Church. He is now also serving as interim Sofia metropolitan bishop.

On Wednesday November 14, the Holy Synod confirmed at a sitting the legitimacy of Kiril’s election.

One day earlier, the Veliko Tarnovo Bishop Grigoriy withdrew his signatures from the protocol of the Saturday sitting of the Holy Synod which elected Kiril as interim patriarch.

Plovdiv Bishop Nikolay also voiced his objections to the appointment.

The Bishops stressed after the Wednesday sitting that the Code of the Bulgarian Orthodox Church, the Bulgarian and the international legal systems did not include a possibility of someone withdrawing their signatures, labeling it “legal absurd.”

The Holy Synod further announced the November 10 sitting has been legal since it had a quorum and no one voiced strong disagreement with Kiril’s choice. The Synod underscored the secret vote allowed those voting to exercise their true will.

The eight Bishops, who signed the Wednesday statement, also say they would not allow anyone to pressure them.

The document was not signed by Nikolay, Grigoriy, Yosif, Simeon, Ignatiy, and Kalinik.

Bulgaria’s Patriarch Maxim, who led the Church since 1971, passed away on November 6 at the age of 98.

Meanwhile, Kalinik sent a note acknowledging the legitimacy of Kiril, and asked to not be considered for becoming the next patriarch of Bulgaria. Yosif and Simeon have also recognized Kiril in letters they sent to the Synod, thus leaving only Nikolay, Grigoriy and Ignatiy in opposition.

When asked earlier to comment when the new patriarch will be elected, the Varna metropolitan said it could be as early as December or January, but stressed preparations for it involve a long process.

The deadline for the election, which can be held only on Sunday, is March 6, 2013.