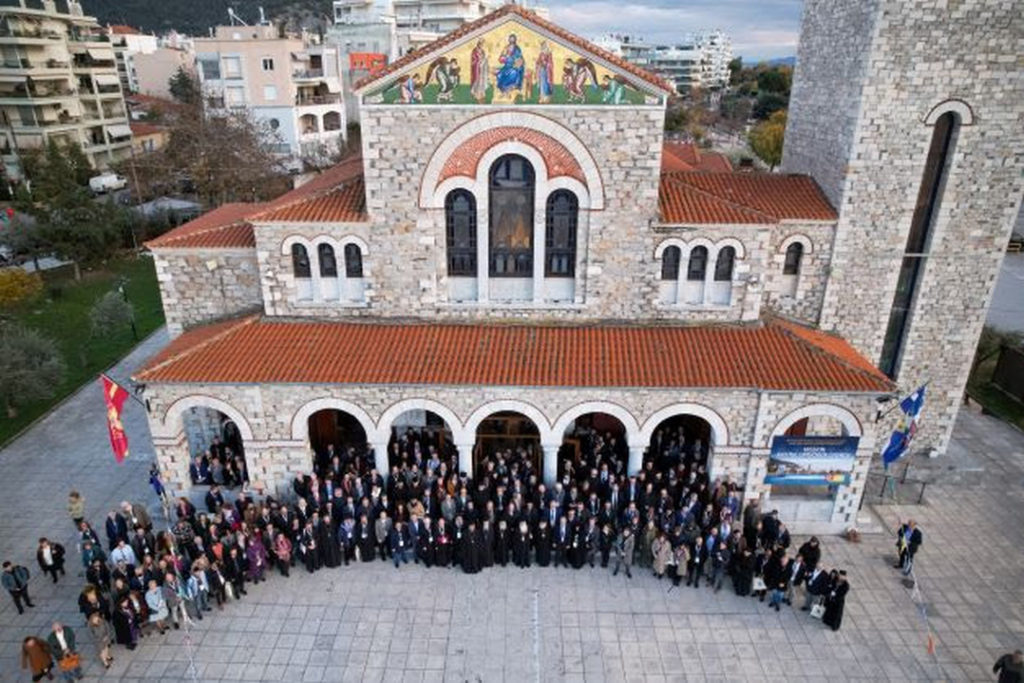 On January 11, 2023, the second Mega-Conference of the International Orthodox Theological Association (IOTA) held its formal opening at the Volos Academy for Theological Studies.

His Eminence Metropolitan Ignatius (Georgakopoulos) of Demetrias presided over Vespers at the Saints Constantine and Helen Church. In his welcome to the conference participants, he said he was grateful that each day would begin with prayer, a sign of the ecclesial significance of the conference. Following Vespers, the approximately 400 participants traveled to the Academy and filled its Great Hall for the opening ceremony.

There, the audience received a welcome from host Dr. Pantelis Kalaitzidis, Director of the Academy. Dr. Kalaitzidis noted that holding the conference in Volos is a testament to the Academy and the Holy Metropolis of Demetrias’s vision of being an internationally recognized place for encounter and dialogue, and open to scholarly thought. He focused on the incarnational reality of the Gospel and the conference’s theme, “Mission and the Orthodox Church.” He stated that mission cannot be only a theoretical or historical concern, but must be a contemporary one, since “God’s revelation takes place in history.” Kalaitzidis said: “A fleshless mission theology which refuses to converse with the wider social and cultural realities of its time is inconceivable. A mission theology that does not assume the flesh of its time is equally as inconceivable, just as it is inconceivable for the church to be insular, refusing to be drawn out of itself to meet the world and history, to evangelize and transform.”

Once again, Metropolitan Ignatius welcomed the participants and expressed how the Orthodox Church preaches the Gospel to a world marked by the war in Ukraine, the coronavirus pandemic, fundamentalism, a climate crisis that threatens the planet, and economic uncertainties. In light of the current war, the Metropolitan called on those gathered at the conference — and the broader Orthodox world — to take on the task of “offering a word of hope and apology.” Deputy Minister of Education and Religious Affairs Mrs. Zeta Makri also welcomed the participants. Her greeting emphasized that the Greek State recognizes Orthodox Christianity as Greece’s dominant religion and simultaneously protects religious pluralism. In reference to IOTA she said: “Your conference has the potential to contribute to Orthodox synodality and pan-Orthodoxy.” 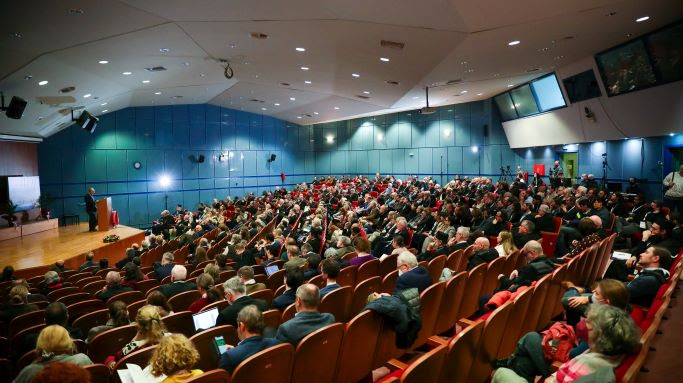 The Presidential Address was offered by IOTA President Prof. Paul Gavrilyuk. He thanked the Volos Academy for their hard work and cooperative spirit in organizing the Conference. He thanked the many volunteers and supporters who make the conference possible, especially the co-chairs of IOTA’s 28 permanent groups which constitute IOTA’s Republic of Learning. He said: “Our group chairs and other leaders make IOTA. Our conference speakers shape IOTA. Your enthusiasm and dedication, and your contributions to this event enrich IOTA. An increasing number of scholars, church leaders, and professionals find our mission compelling. Our mission is straightforward: to foster a worldwide exchange of knowledge within the context of the Orthodox tradition for the sake of serving Christ and the church.” 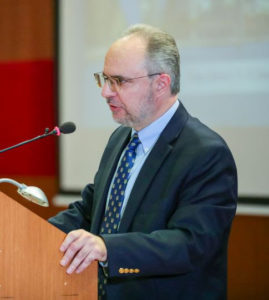 President Gavrilyuk described the tremendous growth that IOTA has experienced since the inaugural conference in Iasi, Romania in 2019. Since then, IOTA has been able to add a YouTube channel, and a publishing arm, and has been able to participate in and sponsor smaller activities. He encouraged the participants to share their projects with IOTA. As he said, “If you oversee a project that could be publicized by IOTA, share your initiative with the Board of Directors. Talk to us during a coffee break. Tell us what you are doing and how we can help you grow. To put this differently: how can we help you to do better what you are already doing well?”

Gavrilyuk recognized the presence of Orthodox bishops from eight local Orthodox Churches, including the Oriental Orthodox communions. He said: “We are honored by your presence. As a society that embraces all Orthodox jurisdictions, IOTA is committed to an open and constructive collaboration with the episcopate. It’s important that scholars and church leaders continue building mutual trust and understanding.” He also acknowledged the participation of Catholic and Protestant scholars, stating, “Orthodox theology cannot be done in isolation.” 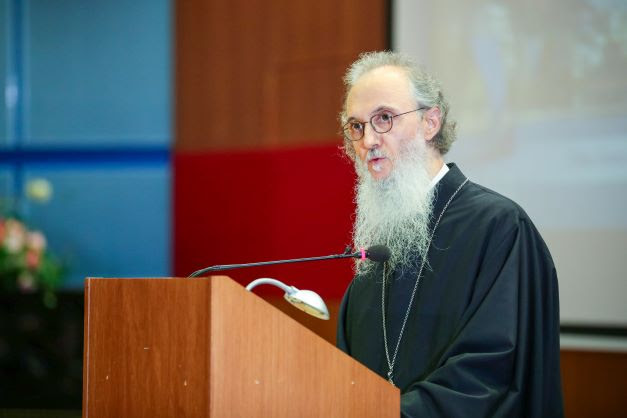 The theme of the conference, “Mission and the Orthodox Church,” was addressed in the opening keynote address by Metropolitan Ambrosios (Zographos) of Korea. He was introduced by Dr. Teva Regule, President of the Orthodox Theological Association of America (OTSA). The keynote address was the annual Florovsky Lecture of OTSA, which honors the great twentieth-century theologian Fr. Georges Florovsky. In the keynote, Metropolitan Ambrosios offered a powerful examination of what he called the “heresy of ethnophyletism,” which places national identity over Christian identity, and “threatens to destroy the genuine criteria for spreading Orthodox witness.” As he stated, “Ethnophyletism becomes a reason for the Orthodox to be sad, the heterodox to be scandalized, and the atheists to rejoice!”

Metropolitan Ambrosios described the effects of the establishment of a Russian jurisdiction in Korea, violating the canonical order of the Orthodox Church — and one that had uniquely been in place in Korea for decades — of one bishop for all the faithful in a place, “regardless of race, language, ethnic and cultural identity.” He noted the casual dismissal of the canonical order by the Russian Church when questioned about this development. Metropolitan Ambrosios challenged the participants, saying: “There is no deep desire to address ethnophyletism in the Diaspora, since it would require a spiritual revolution within our identities.” 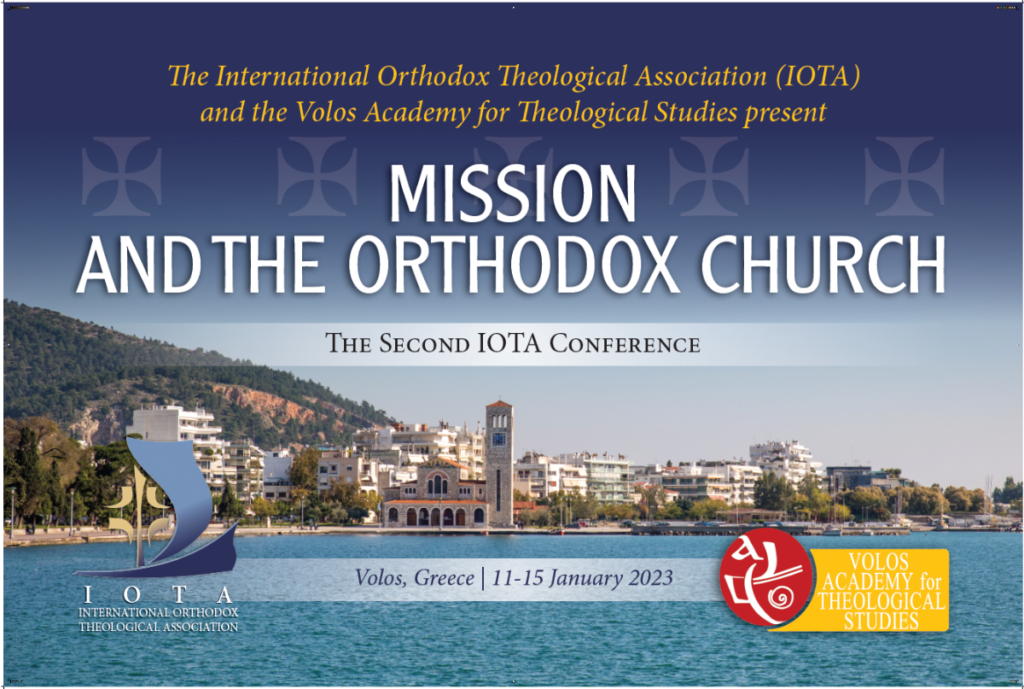 The second Mega-Conference of the International Orthodox Theological Association is taking place in Volos Greece, from January 11-15, 2023. The four-day conference will feature about 350 specialized speakers covering 28 study areas. The speakers have traveled to Volos from many countries in America, Europe, Australia, Asia, Africa, the Balkans, and Russia, and include the participation of bishops from various Orthodox Churches and dozens of clergy and monks. Papers were peer-reviewed, thus leading to an overall high-quality academic presentation. The conference organizers were able to support participation from usually under-represented Orthodox populations: student speakers; scholars with financial need; and in particular, scholars from the Global South, allowing for participation from Argentina, Brazil, Cameroon, Ethiopia, Kenya, South Korea, and Uganda. The conference is supported by important theological institutions and research centers from throughout the world.

A unique feature of this mega-conference will be the plenary sessions where the participants will discuss issues of particular importance: war and peace; the church and the pandemic; and the 2020 social ethos document of the Ecumenical Patriarchate of Constantinople, For the Life of the World.

A fruit of the Pan-Orthodox Synod that took place in Crete (2016), IOTA was founded in 2017 with the aim of contributing theologically to the renewal of the Orthodox Church, supporting pan-Orthodox unity and synodality. As a pan-Orthodox non-profit organization, IOTA does not belong to any local Church and strives to maintain constructive relations with the leaders of all Orthodox Churches. 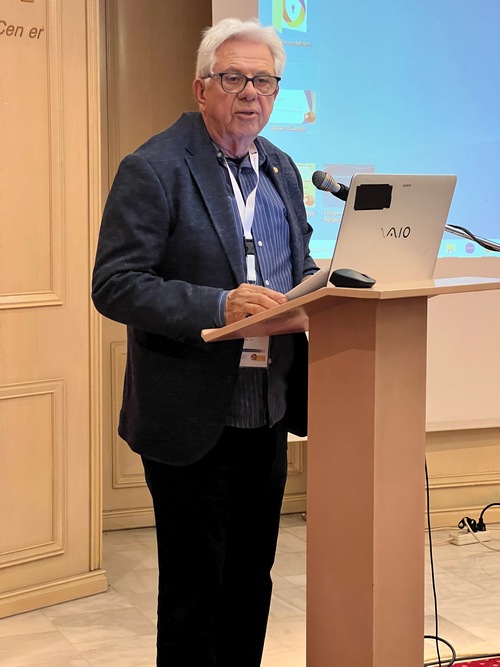