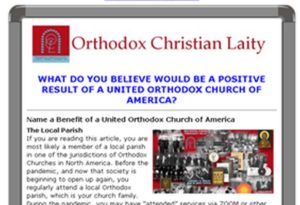 In May’s “eblast”, we promised to share the results of the two-question survey regarding positive results of a united Orthodox Church of America. We heartily thank all of you readers who made the time to complete the short survey and share your valuable opinions and insights!

Of 57 responses, 82.8% agreed that the following are benefits of a united Orthodox Church of America: 1) Essential ministries and programs are no longer duplicated by multiple Orthodox jurisdictions. 2) Civil government and society value the Church for its Orthodox faith and life instead of as a representative of a particular country or ethnic tradition. 3) The bishops and clergy serve Christ and his Church on the American continent and are not servants of state churches and governments in other lands.  15.5% disagreed, and 1.7% responded that “money is saved since programs are not duplicated.

To the open-ended statement, “Please list other benefits for your local parish community that you believe would result from a united Orthodox Church America,” we received the following responses (responses have been edited for grammar and personal names):

The Church presents itself in a unified presence to those who are seeking Christ.

For once, we would offer a clear and united voice for the Orthodox Faith in America.

The time is long overdue for the diaspora of the Ancient Christian Faithful in America to come together and to unite as one Church body under the oversight of a single independent and presiding autocephalous (American Patriarch) Bishop and recognized as such by the Synod of the One Holy Catholic and Apostolic Church.

I envision more all-English services, pan-Orthodox activities, and (most importantly) more opportunities for evangelism to bring people into the One True Faith as opposed to a disconnected bunch of ethnic communities simply catering to themselves and their own needs.

A United Orthodox Church in America would provide an American perspective to Orthodox beliefs and practices.

Financial savings can be used for philanthropic purposes consistent with our faith.

Orthodoxy will speak with a single voice in America.

Worship events like Sunday of Orthodoxy and others that truly comprise an “Orthodox” church, not a single or few jurisdictions.

I see the most beneficial result, besides the financial aspect of mergers, would be the sharing of so many varied customs and cultural differences among our local parishes. We have Antiochian, Albanian, Bulgarian, Greek, Romanian, OCA, and maybe more, jurisdictions represented: what a panoply! In addition, by the strength of numbers, we could have better-supported seminaries and monasteries.

We would present a united, unconfusing image to America.

I would, but it is truly to no avail, as a united Orthodox Church America is nothing more than an illusion, completely unrealistic.

The only two reasons we do not have a unified Orthodox Church on the American Continent now are (1) Because of the bickering and power-clutching of the American bishops who never want to give up the power and prestige of their puppet fiefdoms, tiny though they might be, and (2) Because of the power-clutching of the bishops, metropolitans and patriarchs of the Old World, who view America as the cash-cow to finance their own banana-republic regimes. … Both of these abuses reflect human pride and hubris, are disgraces and need to come to a screeching halt. Perhaps a unified North American church would greatly reduce the abuses mentioned in item (1,) and would certainly reduce the string-pulling and intrigues of the Old World puppeteer masters behind the curtain (which is item [2] above.) Unfortunately, many of the “leaders” of the church today present themselves before the world more as politicians and CEOs of businesses, rather than as grace-filled holy men. They garner no respect whatsoever from me, and I consider them scoundrels eating at a trough provided by a flock which they have duped.

Your objectives are superficial and will not be accomplished simply by being “administratively united.” The World’s Orthodox Churches have matured over many, many Centuries of trials and tribulation, although they also often display human frailties. We are still “immature know-it-alls” more influenced by our non-Orthodox surroundings than deep spirituality. We are not yet able to understand the wisdom of the 2000 years of the Faith. Give us a couple more centuries, and with the guidance of the Holy Spirit, we may evolve to a point of the spiritual unity we need.

Help spread the words and teachings of Jesus. Empowers more people when we are united. Walk as one body.

The clergy would participate in liturgical events in all Orthodox churches regardless of jurisdictions and relations among mother churches (i.e. Russian and Greek, OCA and Romanian).

We would have major Orthodox Cities+Towns+Churches+Centers+Communities united to the One Holy Body and Holy Blood of Our Lord and Savior Jesus Christ.

Hierarchs will be appointed to serve American needs not foreign.

Domestic missions could be much more effectively pursued.

More effective provision of social services to those in need.

People might feel they can attend any Orthodox church, particularly one that most performs the service in one’s preferred language, and still feel part of the canonical Orthodox faith without feeling like they must change the ethnic traditions of a certain parish. I do not agree that separating ethnic traditions from Orthodoxy would be beneficial in any way to a parish.

There probably would be few. My parish is very Russian-centric.

Orthodox people would be more inclined to “stick with” the church in their adult years if they felt they belonged to one of the more visible and “American” faiths in our country.

Since my local church is composed of many ethnicities, as well as mixed marriages, we have no identification with national churches outside the US. Having said this, I believe that if there were to be a ‘united’ Orthodox church in the US, there will be a sharing of people, thereby donations, which should not be funneled to foreign authorities. The ‘witnessing’ of the Orthodox to the Americas would be the only way to truly evangelize those who do not know the Truth that the Orthodox Faith upholds. This truly would be a benefit to our local parish, as well as to the Church at large.

A united presence to the North American community in numbers that merit acknowledgment. It’s difficult to have a missionary impact when we’re hardly known.

Being Administratively-united, but not Eucharistically and uniformally. Having multiple hierarchs still rule the roost and doing what they want uncanonically is no unity at all.

We could have all services in English and not be an immigrant church. That would be more welcoming to visitors or inquirers. That would also be beneficial when someone marries and their spouse doesn’t understand Greek or Russian.

The above, however, eliminates options for the faithful. Presently, if the parish and its priest and its diocesan bishop/hierarch are tyrants and unreasonable in their interpretation of the faith, then the believer is left without options. Under our current situation, with diverse jurisdictions, a disgruntled and/or violated member of the faith has an option to move to a more reasonable and more open-minded jurisdiction that may be more accommodating to one’s spiritual needs. Therefore, I would suggest that you provide a third option to the above question, namely “unsure”.

Unfortunately, Constantinople’s meddling in Ukraine has made this untenable for the foreseeable future.

Higher profile in the Christian world.

The non-“ethnic” spouses, converts and others living in North America who are seeking a home in Orthodoxy would not have to navigate through a confusing collection of “foreign” languages/cultures in order to find a welcoming home in an English-speaking Orthodox Church. A united Orthodox Church in America would also offer a home to those who have left the Church because of its emphasis on preserving Old World languages and cultures rather than the rich teachings of Orthodoxy.

I would like to see something close to the Western Rite, but retaining as much of the Eastern Tradition as possible.

Christ’s prayer before his crucifixion was that we all might be one, as He is one with the Father. Doing His will is a big benefit!

Remove ethnic/language barriers for potential converts would create a movement for a more “standardized ” Divine Liturgy in America Create the unity that Orthodoxy strives for.

Real recognition of Orthodoxy in America.

Ethnicity in many Orthodox Churches is fundamental. Direct contact or connection with a foreign country is not. Although I attend an OCA church, I know dual languages are spoken in most all dioceses throughout the country. Being a United Orthodox Church of America and Canada and even Mexico would make it a stronger organization to do more in disaster relief, outreach, schools and helping in the community. It’s what Christ wants us to do. As we are today, we are splintered and unable to be as effective in carrying out the desires of Christ.

The apostasy of the New Calendarists will be obvious to anyone with eyes to see.

Donations/tithes no longer go offshore to the so-called ‘mother church.’ Clergy are more accountable to US leadership. Most important: the end of being colonized. Leadership is united/committed to Orthodox parishes in America.

I’ve been worshiping at a Romanian parish during the COVID crisis; hardly anyone there speaks English. How would an English language behemoth command structure benefit them? I think God likes small scale better. Remember Babel: he scattered the people into ethnic/linguistic tribes because their command structure was getting too powerful and prideful. The Roman Catholic Church is huge in the US, however, I don’t really see that government bodies and officials care much about Christian values espoused by the RC church, do you? This movement of “Orthodox unity” is a canard; dogmatic unity already exists. Each Orthodox body in the US is currently engaged (hopefully) in bringing Christ to its people through the same dogmas and teachings, see… already united in goal and dogma. Why do you believe additional unity is needed? Wait, on second thought maybe the GOA would be forced to become more traditional (i.e. less secular, less modernist) if it had to cooperate with the smaller Eastern (European) Orthodox bodies? That would be good! The GOA seems to be losing its way in transmitting the eternal, salvific truths (way of life) that make Orthodoxy the unique and valuable treasure it is. OCL, WAKE UP!!! We need more saints, not more “unity.”

Hopefully, a righteous united voice against sin and tyranny.

I don’t believe #2 would happen at all. Other benefits would be that we would be following Canon Law.

Move toward services completely in English.

The Church would likely grow. Presently there is a perception that only __ goes to the __ Orthodox Church. It does not present a welcoming image.

Unification of outreach efforts and a more inclusive family where there are no longer Greek, Russian, Romanian, Serbian and OCA churches but one family of churches who are united in America.

Speaking with a voice of canonical fidelity.

GIVE US YOUR FEEDBACK ON THESE RESPONSES IN THE COMMENT SECTION BELOW THIS ARTICLE. LET’S START A DISCUSSION AND REASON TOGETHER!

Share. Twitter Facebook Pinterest LinkedIn Tumblr Email
Previous ArticlePatriarch John X of Antioch Calls for Unity with the Syriac Orthodox Church of Antioch
Next Article WHAT IS PREVENTING THE ADMINISTRATIVE UNITY OF THE ORTHODOX CHURCH ON THE AMERICAN CONTINENT?