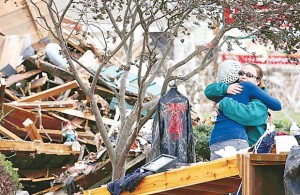 by Evan C. Lambrou
Special to The National Herald

NEW YORK – After Hurricane Sandy devastated the East Coast at the end of last month, the most respected philanthropic agencies across the country mobilized to help millions of people who were left without power, and the many thousands whose homes were completely destroyed by wind and water.

Other Greek-American organizations have also gotten behind efforts to help people impacted by Sandy – so far the second costliest and arguably most expansive storm in American history – and have teamed up (by osmosis, as it were) to assist Sandy’s victims in various places.

To the north in Toms River, NJ, IOCC frontliners joined Philoptochos and members from local AHEPA chapters to assemble and distribute emergency cleanup buckets to more than 150 local residents trying to salvage their wind- and water-damaged homes.

In New York, IOCC has been cooperating with the Archdiocese and New York City Mayor Michael Bloomberg’s office in response to the most pressing needs of survivors to distribute emergency relief items. A shipment of more than 1,300 cases of donated bottled water – along with 6,300 quilts and 4,600 personal hygiene kits, provided in cooperation with Lutheran World Relief – was sent to Queens, where it was distributed to displaced families living in local shelters.

An additional shipment of food, water and blankets was sent to Holy Trinity/St. Nicholas Church, which is serving as the Greek American community’s central distribution center for food, water and clothing in Staten Island, which bore the brunt of the storm’s wrath, leaving many homeless and bereft of the barest necessities.

Frontliners joined IOCC U.S. Operations Director Dan Christopoulos to hand out food and blankets to residents returning to their homes, assess the continuing humanitarian needs, and provide pastoral support to survivors still coming to terms with the epic disaster’s destructive impact on their lives.

“The magnitude of Sandy left no one untouched along the East Coast, and with colder weather setting in, the need for emergency cleanup buckets, blankets and infant kits has taken on a new level of urgency,” Christopoulos said, urging the community to pray for and assist people in need.

“Financial contributions are also a very good way good way to help,” he told TNH. “In the face of calamity, and due to a natural sense of urgency, people typically respond out of the goodness in their hearts, but give things that may not be needed in the aftermath of such an incredible disaster. But the time for urgent response ultimately passes, so we have to start helping people for the longer term. People have lost their homes, and we need to start helping them actually rebuild their homes. That requires planning, so IOCC coordinates such efforts with Habitat for Humanity, which specializes in building affordable housing, so we need volunteers for that.”

IOCC will continue helping local Orthodox churches with logistical support – e.g., how to mobilize volunteers – as well as network with government authorities and agencies like Habitat for Humanity to help Orthodox Christians and their neighbors in the afflicted areas, he added.

“IOCC is the Church in action, and the Church is fully engaged in the effort to help people cope with these terrible problems. We have two 40-foot containers thru the Mayor’s Office, and when that truck gets in there, people will know it’s coming thru the efforts of the Orthodox Church,” Christopoulos said.

IOCC is the official humanitarian aid agency of the Assembly of Canonical Orthodox Bishops of North & Central America. Since its inception in 1992, IOCC has delivered more than $400 million in relief and development programs to families and communities in 50 countries. The agency’s ability to work with its humanitarian partners and distribute large quantities of goods and supplies for emergency relief has only improved over time, especially since Hurricane Katrina devastated the Gulf Coast region in 2005, according to IOCC Executive Director Dean Triantafilou.

As Sandy moved further inland, the agency’s emergency response crews were already assessing the damage and working to help restore critical services so that people could return to their normal daily lives as quickly as possible, he said.

IOCC was in constant contact with various Orthodox Christian jurisdictions and disaster response networks throughout the East Coast, he added, and had received initial requests for anticipated shipments of emergency relief items from its ecumenical partners, urging all Orthodox Christian parishes to assist by assembling emergency relief items and by making financial donations.

AHEPA was also quick to jump onboard the humanitarian train, activating several chapters in the New York and New Jersey where storm damage was the most severe, and is working with IOCC at the local level. AHEPA Executive Director Basil Mossaidis quickly contacted AHEPA’s membership nationwide, and asked them to assist.

“Brothers, following the devastation caused by Hurricane Sandy, the AHEPA Emergency Response Committee is working with AHEPA Headquarters to coordinate relief efforts for those affected in New York and New Jersey. Our chapters in New York and New Jersey are acting as our eyes and ears, and letting us know where help is most needed. Currently, Chapter 41 in Brooklyn, Chapter 349 in Staten Island, Evzone Chapter 405 in Westchester County, and Chapters 72 and 108 of Trenton and Hudson, NJ have mobilized and volunteered extremely needed man hours in the field,” Mosssaidis wrote in a letter.

“AHEPA Headquarters has committed to raising funds to buy equipment, food and clothing necessary to assist our chapters in this endeavor, and we’re reaching out to our membership for help, as well. We encourage your chapter to send as much as it can to any of the aforementioned chapters in order to help. If your chapter is unable to send goods, financial contributions can be made through AHEPA Headquarters. As part of the relief effort, National Headquarters, Empire State District 6, local chapters and other groups and individuals are sending supplies, care packages, and donations. Please make a commitment and help in this noble cause by sending in your contribution in as well,” he said.

Concerned citizens who would like to help victims of Hurricane Sandy can do so by sending their monetary gifts to the U.S. Emergency Response Fund, which provides immediate relief as well as long-term support through emergency aid, recovery assistance and other services to help those in need. To donate, please visit www.iocc.org, or call toll free at 1-877-803-IOCC (4622), or mail a check or money order made payable to IOCC, P.O. Box 17398, Baltimore, MD 21297-0429 (please write USERF on the memo).

Hurricane Sandy’s victims also need clothing, socks underwear and blankets, but everything must be new, Mossaidis emphasized. “No old or used materials will be used. They will be thrown away. People should donate only newly purchased items,” he said.