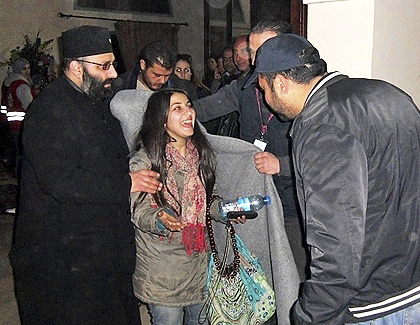 A young Syrian girl evacuated from Homs is warmly welcomed by IOCC/GOPA staff with water and a blanket as she arrives to safety. IOCC/GOPA is assisting in the evacuation of nearly 3,000 people from Homs, which has been under siege for 18 months. photo: IOCC/GOPA

Baltimore, MD (IOCC) — Syrian civilians evacuated from the embattled city of Homs under a UN-negotiated cease-fire are being aided by International Orthodox Christian Charities (IOCC) as they flee to safety. IOCC and its church partner in Syria, The Greek Orthodox Patriarchate of Antioch and All the East (GOPA), are in Homs assisting in the evacuation that began this weekend and are providing emergency relief to the Syrian people fleeing the city.

Among the evacuees were ten youths who were immediately taken to the nearest medical facility for needed vaccines and medical attention. IOCC/GOPA also assisted in providing the young evacuees with food, clothing, shoes, hygiene kits, and blankets.

Nearly 400 residents from the Homs neighborhoods of Alaqrabas, Jouret Shiah, Khalidiya, Karabis, and Bustan Al Diwan fled the city today on foot flanked by UN humanitarian vehicles for protection. Those who were not too weak from months of malnutrition walked for more than two hours before reaching safety.

On the ground, efforts are continuing to evacuate hundreds more women, children and elderly people from Homs, which has been under siege for 18 months. More than 1,100 people have fled the city since Friday under a truce. As additional evacuees flee, IOCC/GOPA is prepared to assist them with food, medical assistance, transportation for those who choose to stay with relatives, and shelter and bedding for displaced Syrians with nowhere else to go.

Responding to one of the worst humanitarian and refugee crises in history, IOCC, an ACT Alliance member, is among very few international nongovernmental organizations working in Homs and 24 offices across Syria to provide aid to people who have been displaced inside their country by the civil war. Since February 2012, IOCC has provided relief to nearly one million vulnerable people inside Syria.

Share. Twitter Facebook Pinterest LinkedIn Tumblr Email
Previous ArticleDialogue and Peace – Address of Patriarch Bartholomew to the Eurasian Economic Summit
Next Article A Presentation: UPDATE ON THE WORK OF THE ASSEMBLY OF CANONICAL ORTHODOX BISHOPS in NORTH AND CENTRAL AMERICA