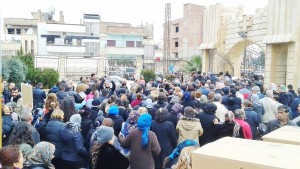 Exhausted and traumatized Christians from villages in northeastern Syria gather at an Orthodox Christian Church in Hasakah, seeking refuge after their small communities were terrorized this week. IOCC with its church partner, the Greek Orthodox Patriarchate of Antioch and All the East (GOPA), is providing food, medical attention, and emergency aid to more than 1,000 displaced families. photo: IOCC/GOPA

Baltimore, MD (IOCC) — Fleeing for their lives, more than 2,400 exhausted and traumatized Christians from northeastern Syria sought refuge in the towns of Hasakah and Qamishli after their small communities were terrorized this week. The attackers targeted a stretch of villages along the southern bank of the Khabour River, where they burned homes and churches, murdered a fleeing 16-year-old boy, and abducted 150 Assyrian Christian men, women and children from their homes.

For those who managed to escape the attack and seek shelter in Hasakah, International Orthodox Christian Charities (IOCC), with its church partner, the Greek Orthodox Patriarchate of Antioch and All the East (GOPA), is providing food, medical attention, and emergency aid. IOCC/GOPA, which has offices in both Hasakah and Qamishli, is responding to the immediate needs of more than 1,000 displaced Syrian families seeking shelter at the Syriac Orthodox Church and the Assyrian Church in the Al Nasreh neighborhood of Hasakah with the distribution of food parcels, bedding, infant clothing and shoes. More than 600 of the survivors who fled the onslaught are children.

IOCC, an ACT Alliance member, is one of the few humanitarian organizations inside Syria providing immediate assistance to displaced families and elderly who have endured four years of a brutal war. Working in 28 offices across Syria, IOCC has provided relief to 2.5 million vulnerable people inside Syria since 2012.

HOW YOU CAN HELP
You can help the victims of poverty and conflicts around the world by making a financial gift to the International Emergency Response Fund which will provide immediate relief, as well as long-term support through the provision of emergency aid, recovery assistance and other support to help those in need. To make a gift, please visit iocc.org or call toll free at 1-877-803-IOCC (4622), or mail a check or money order payable to IOCC, P.O. Box 17398, Baltimore, MD 21297.

ABOUT INTERNATIONAL ORTHODOX CHRISTIAN CHARITIES
IOCC is the official humanitarian aid agency of the Assembly of Canonical Orthodox Bishops of the United States of America. Since its inception in 1992, IOCC has delivered $538 million in relief and development programs to families and communities in more than 50 countries. IOCC is a member of the ACT Alliance, a global coalition of more than 140 churches and agencies engaged in development, humanitarian assistance and advocacy, and a member of InterAction, the largest alliance of U.S.–based secular and faith-based organizations working to improve the lives of the world’s most poor and vulnerable populations. To learn more about IOCC, visit iocc.org.