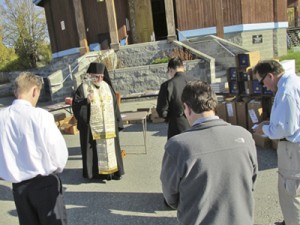 Families and community leaders gather before St. Innocent Orthodox Cathedral in Anchorage, Alaska, as His Grace, Bishop David of the Orthodox Church in America Diocese of Sitka and Alaska, blesses more than 8,000 new books donated by IOCC for the state’s underserved children. The books will be distributed to tutoring and after school programs, while Orthodox priests traveling to remote Alaskan communities will help distribute the books to underserved children. photo: IOCC

Baltimore, MD (IOCC) — From the smallest rural towns to the biggest cities, two-thirds of America’s children living in poverty have no books at home, according to the nation’s largest literacy program, Reading is Fundamental. Children with no regular access to books and reading are at greatest risk for struggling in school and in adulthood. Unfortunately, books are often inaccessible for children whose families are trying to makes ends meet and the cycle of poverty and low educational achievement are reinforced.

International Orthodox Christian Charities (IOCC) is working to promote literacy and learning for underserved youth in America. More than $773,000 in new books and reading materials were distributed by IOCC recently to children participating in tutoring, after school and early childhood education programs in four of the six states with the highest poverty rates in the United States – states that also rank near the bottom in educational outcomes for their children.

IOCC’s U.S. Program provided brand new books and educational materials to Alabama, Georgia, Louisiana, and New Mexico – states where nearly one in five families fall below the poverty level of $23,834 for a family of four. Books have also been provided for Detroit area children through the Council of Orthodox Churches of Detroit and for Alaska’s underserved children through the Orthodox Diocese of Sitka and Alaska. In Detroit, more than one in four families and a staggering 39% of children live in poverty, according to the U.S. Census Bureau American Community Survey.

“I often ask families if they have books in their homes that they can read to their children,” explained William Haskett, Family Service Coordinator of Union Baptist Head Start Program in Baltimore and a long-time IOCC partner who has helped facilitate distribution of books to more than 20 states over the past three years. “Most of them don’t have books or other reading materials available. The books help to open new opportunities for these children and their families.”

Bishop David of the Orthodox Church in America Diocese of Sitka and Alaska echoed that sentiment at a ceremony held to bless books at St. Innocent Orthodox Cathedral in Anchorage, Alaska on September 25. “Educating our children, especially in today’s world, is one of the most important tasks we perform,” said Bishop David. “We will make sure that the books get into the hands of children and families throughout Alaska that can make the best use of these valuable resources.” Orthodox clergy traveling to remote Alaskan communities will help distribute the books to underserved children.

In a study of 35 developed countries, the United States has the second highest level of childhood poverty with a rate of 23.1%, according to UNICEF.

“There is a clear relationship between education and poverty,” observed Daniel Christopulos, IOCC U.S. Country Representative. “Education is a primary means by which families can lift themselves out of poverty and participate fully in their communities. Through this program and the support of Orthodox hierarchs, parishes and community partners who are working with us to make these resources available to children in their communities, we aim to help break this cycle of poverty.”

ABOUT INTERNATIONAL ORTHODOX CHRISTIAN CHARITIES
IOCC is the official humanitarian aid agency of the Assembly of Canonical Orthodox Bishops of the United States of America. Since its inception in 1992, IOCC has delivered $488 million in emergency relief and development assistance to families and communities in more than 50 countries. IOCC is a member of ACT Alliance, a global coalition of more than 140 churches and agencies engaged in development, humanitarian assistance and advocacy, and InterAction, the largest alliance of U.S.–based secular and faith-based organizations working to improve the lives of the world’s most poor and vulnerable populations. To learn more about IOCC, visit iocc.org.