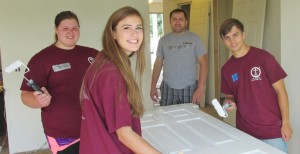 Serve-X-Treme Youth Leadership Conference participants, Olena, Christianna, and Jimmy help construct a home in Minneapolis with Habitat for Humanity as the new homeowner, Petr, looks on in gratitude. Along with workshops led by Orthodox community leaders, 25 teens representing pan-Orthodox youth from around the US also spent time participating in hands-on service projects in local soup kitchens, shelters and building projects. The conference was designed to promote youth service leadership through community service activities and instruction focused on building a better understanding of Orthodox ethics as well as practical approaches to community outreach. photo: Dan Christopulos / IOCC

Baltimore, MD (IOCC) — When record rainfall drenched the Midwest in July and triggered massive flooding of communities across Minnesota and Iowa, teen volunteers from St. Mary’s Greek Orthodox Church in Minneapolis were among the dozen members of an International Orthodox Christian Charities (IOCC) Orthodox Action Team who traveled to the hard-hit Iowa town of Rock Rapids to help an elderly flood survivor clear away waterlogged debris from his home. Orthodox Christian youth across the U.S. also have a history of eagerly volunteering their time and energy to assist IOCC in helping families rebuild and repair storm-damaged homes, and assemble emergency kits for disaster survivors.

IOCC is fostering this philanthropic spirit among Orthodox youth with the launch of its inaugural Serv-X-Treme! Youth Leadership Conference, held recently in Minneapolis. More than two dozen teen delegates, appointed by their respective hierarch and representing the pan-Orthodox community from around the country, came together for a week to engage in meaningful opportunities to serve others while developing a better understanding of Orthodox Christian philanthropy and diakonia, or service.

Along with workshops led by Orthodox community leaders, including a keynote address by the well-known Orthodox author, Reverend Anthony M. Coniaris, the teens also spent time in the community participating in hands-on service projects. A highlight of the service projects came on a day when the participants helped construct a home with Habitat for Humanity and had the opportunity to interact with the homeowners, new Minnesota residents from Ethiopia and the Ukraine. The week concluded with each participant signing a pledge committing them to continue seeking out service opportunities and encouraging others to do the same, within the framework of an Orthodox understanding of such diakonia.

Serv-X-Treme Conference coordinator and IOCC U.S. Country Representative, Dan Christopulos, says the conference, made possible with the generous support of an IOCC donor, was 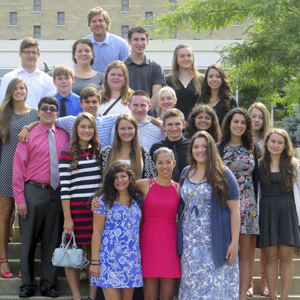 IOCC is fostering the philanthropic spirit among Orthodox youth with the launch of its inaugural Serv-X-Treme! Youth Leadership Conference. More than two dozen youths representing the U.S. pan-Orthodox community came together for a week in Minneapolis to engage in meaningful opportunities to serve others while developing a better understanding of Orthodox Christian philanthropy. photo: Dan Christopulos / IOCC

designed to promote youth service leadership through community service activities and instruction focused on building a better understanding of Orthodox ethics as well as practical approaches to community outreach. “Our intention is for these Orthodox youth to take this new-found knowledge, return to their parishes with a zeal for diakonia and take the lead in building a strong network of service throughout our country’s Orthodox Christian community,” said Christopulos.

Participants Christianna Konstans and Kamal Hourani reflected on the week-long gathering and the opportunity to learn more about improving communities. “During my time at the

IOCC Serv-X-Treme conference, what impacted me most were the various ways that I could serve that I had never thought of, as well as better ways to serve in things I had already been doing. The incredible fellowship with people that were willing to serve was unlike anything I had ever experienced, “said Konstans. “The Serv-X-Treme Conference reignited my desire to serve those who are suffering and sharpened my awareness of the demands of effective social work,” added Hourani. “It was a true blessing to share in this conference with fellow Orthodox teens from different states, jurisdictions, and backgrounds. They all have become dear friends and my co-laborers’ in Christ’s vineyard.”

The Serv-X-Treme! Youth Leadership Conference is part of a broader effort by IOCC to develop the Orthodox Christian Action Network (Orthodox CAN!), a US-based initiative to nurture and activate the Orthodox community’s value of philanthropy through volunteerism across all age groups. The multi-pronged program also promotes and supports an Orthodox Christian Emergency Response Network (ERN) of more than 100 clergy and laity members, trained through a grant from the Archbishop Iakovos Leadership 100 Endowment, to respond in times of disaster, and the development of volunteer opportunities through parish-based community service projects such as emergency kit assembly and emergency preparedness.

ABOUT INTERNATIONAL ORTHODOX CHRISTIAN CHARITIES
IOCC is the official humanitarian aid agency of the Assembly of Canonical Orthodox Bishops of the United States of America. Since its inception in 1992, IOCC has delivered $488 million in relief and development programs to families and communities in more than 50 countries. IOCC is a member of the ACT Alliance, a global coalition of more than 140 churches and agencies engaged in development, humanitarian assistance and advocacy, and a member of InterAction, the largest alliance of U.S.–based secular and faith-based organizations working to improve the lives of the world’s most poor and vulnerable populations. To learn more about IOCC, visit www.iocc.org.