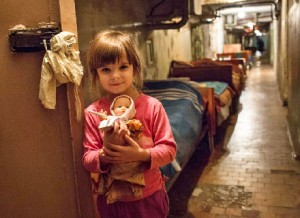 Anna, 3, and her family have been sheltering in this hospital basement for the past five months following an upsurge of fighting in the Ukrainian city of Donetsk. A two-year conflict in Ukraine has displaced 1.5 million people, nearly 180,000 of which are children. IOCC is responding with emergency food assistance for infants and toddlers severely impacted by the conflict. Photo by UNICEF

Baltimore, MD (IOCC) — International Orthodox Christian Charities (IOCC) is responding to the urgent needs of the Ukraine conflict’s most vulnerable victims with emergency food assistance for 900 children under age three living in areas directly affected by the violence in Eastern Ukraine.

Nearly two years of armed conflict has driven 1.5 million Ukrainian people from their homes. UNICEF estimates that nearly 180,000 of those displaced are children. Among the most severely impacted are infants and toddlers, as well as mothers with special needs children. As Ukraine’s brief autumn turns into winter, the living conditions these children face will only worsen.

IOCC, working in cooperation with local relief partner, Slavic Heart, is distributing kits containing essential baby food and hygiene items such as infant formula, baby cereal, juice, and baby wipes. The kits are being directed to vulnerable families living in Svyatogirsk, a small town in the Donetsk region sheltering the highest number of displaced families; and to Svetlodarsk in the Donetsk region and Bryanka in the Luhansk region. Families in these two towns near the front line of conflict face hunger daily as food prices climb and supplies grow scarcer due to damaged roadways and ongoing fighting restricting the movement of commerce in these volatile regions.

The humanitarian crisis in Ukraine continues to deteriorate as the number of Ukrainians in need of assistance has now reached a total of five million people. IOCC continues to assess opportunities to expand its presence there in response to the growing humanitarian needs.

HOW YOU CAN HELP
You can help the victims of poverty and conflicts around the world by making a financial gift to the IOCC International Emergency Response Fund which will provide immediate relief, as well as long-term support through the provision of emergency aid, recovery assistance and other support to help those in need. To make a gift, please visit iocc.org or call toll free at 1-877-803-IOCC (4622), or mail a check or money order payable to IOCC, P.O. Box 17398, Baltimore, MD 21297.

ABOUT INTERNATIONAL ORTHODOX CHRISTIAN CHARITIES
IOCC is the official humanitarian aid agency of the Assembly of Canonical Orthodox Bishops of the United States of America. Since its inception in 1992, IOCC has delivered $534 million in relief and development programs to families and communities in more than 50 countries. IOCC is a member of the ACT Alliance, a global coalition of more than 140 churches and agencies engaged in development, humanitarian assistance and advocacy, and a member of InterAction, the largest alliance of U.S.–based secular and faith-based organizations working to improve the lives of the world’s most poor and vulnerable populations. To learn more about IOCC, visit iocc.org.