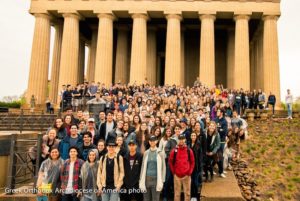 NASHVILLE, Tenn. – Over 275 campers and staff members from the 2017 Ionian Village program came together over the weekend of April 13-15 in Nashville, Tennessee for the Annual Summer Camp Reunion. The two-day reunion was held under the auspices of His Eminence Archbishop Demetrios of America and with the blessing of His Eminence Metropolitan Nicholas of Detroit.

Campers and staff had the opportunity to reunite and rekindle friendships, and their connection to Jesus Christ. The reunion was filled with joy and laughter as everyone participated in various activities reminiscent of camp including Arts and Crafts, Music and Greek Culture and Orthodox Life. In addition, participants were able to tour downtown Nashville and the world-famous American Parthenon. At night, everyone participated in evening activities that included a visit to the Nashville Palace Honkey Tonk where traditional country line dancing was taught and live music filled the air.

On Sunday, campers and staff members joined the parishioners of Holy Trinity Greek Orthodox Church in Nashville for the celebration of the Divine Liturgy, followed by a brunch offered as complements of the community.