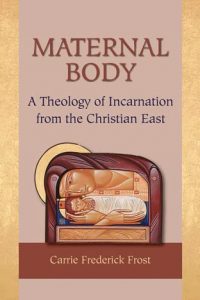 Over the course of Christian history, innumerable sermons, theological treatises, scholarly studies, dogmatic declarations, and sacred hymns and icons have confessed, celebrated and provided insight into the mystery of Christ’s Incarnation. Of these, but a fraction extol and explore the mystery of the place where He first appears, and through which He becomes incarnate: the maternal body of His mother, Mary. While not entirely silent on this, the Church has been reticent to extol the profound interconnection between Mary’s life-giving body and that of her Son, and has said even less about what that means for the bodies of all mothers. In her recent and, in some ways, groundbreaking book, Maternal Body: A Theology of Incarnation from the Christian East, Carrie Frederick Frost begins the task of plumbing the depths of meaning in the interconnection between the Incarnation and the bodies of the mothers through whom the embodiment of every living person, including that of the Incarnate One Himself, come into being.

Dr. Frost asserts that this particular exploration of embodiment is crucial for understanding not only who and what we are, but also who we are meant to be. She says that the maternal body is “uniquely evocative of incarnational theology because the experience of motherhood is expressly embodied “(p. xxviii).  By this she means that motherhood itself, in all its phases, is explicitly, incessantly, and vividly corporeal in a way that cannot be ignored or equaled. It thus leads directly to reflection on corporeal reality, providing a new avenue through which to grasp our own incarnation, and “we need to embrace our incarnation in order to experience deification” (p. xxix).  Much of the history of Christian doctrine, especially in the Orthodox East, has emphasized that an inadequate understanding of the Incarnation not only leads to a denigration of the body and the material creation but also endangers the very possibility of our salvation and transfiguration. In this work, Dr. Frost takes a road never before traveled—namely, reflection on a woman’s body in her work of motherhood—to lead us to a deeper understanding of the Incarnation, our own embodiment, and our salvation.

I say this slim book is “groundbreaking” for various reasons: it examines materials often overlooked in theological study, such as hymnography and iconography; it develops the topic well beyond any previous explorations; it respectfully and thoughtfully challenges Orthodox Christians to recognize points where current (and past) practices stray from the Church’s own truth; and it does this in a way accessible to the layperson without shying away from the theological complexities of the topic. This accessibility is built on the decision Dr. Frost makes to draw on her own experience as a mother of five, including triplets, as a resource for this discussion. This choice of method also means, however, that the book is not primarily an academic or scholarly study, although Dr. Frost includes elements from that type of study. Even less is it an exhaustive treatment of the subject, nor is it meant to be. Rather, Dr. Frost leads us into contemplation of profound mysteries through human experience, which is itself a truly Orthodox method for exploring truths of our faith. It points to the reality that even our pursuit of knowledge is embodied.

In her prologue, Dr. Frost explains that the catalyst for the book was her triplet pregnancy, in part because it made personally real the intensity with which the physical and the material are interwoven. Throughout the book, this experience informs her study, providing the reader a relatable guide and an entry point we have all experienced—whether as mother or child, or both—to the topic. For example, as she examines the topic of conception, she moves from the Orthodox understanding of conception as the moment when a new human person is formed, and is known and blessed by God; to the importance of anticipating, through conceptive union in marriage, the welcoming of that new person; to the experience of recognizing that reality (three times over!) in the ultrasound of her pregnancy; to the ways in which her triplets would recount the story of their own conception; to the services and icons that celebrate significant conceptions in the life of the Church. Equally important, however, for expanding and deepening study of this profound Christian mystery, is that Dr. Frost here offers the heretofore virtually unheard voice, perspective and insight of a woman and mother theologian speaking directly and intentionally from that perspective, a voice significantly missing from Orthodox studies.

Dr. Frost devotes separate chapters to each of the major phases through which the body of a mother passes in the formation, gestation, and early nourishment of her child: Conception, Pregnancy, Birthgiving, Postpartum, and Breastfeeding.  Although in this work Dr. Frost centers her reflections on the movement of the maternal body through these phases, she is also sensitive to the reality that a discussion of the maternal body rightfully includes women who are infertile and/or miscarry, and also those who adopt. In her chapter on Conception she tackles the pain of infertility and miscarriage, again treating it not only from the life of the Church, with examples of holy women who struggled with barrenness, but also from her own life experience, when she worried about her own ability to conceive. She takes the further step of addressing a very real source of pain for couples—and women especially—who suffer miscarriage: the Orthodox prayer for a woman who has miscarried/aborted an infant. Describing this prayer as an example of one of those rare occasions when there is a “rift between Orthodox theology and Orthodox practice” (p. 16), she points to how this prayer not only fails to provide the reconciliation it seeks to effect, but actually deepens the pain of the loss.  In later chapters, Dr. Frost examines the prayers for the Churching of mother and baby with a similar eye to identifying the ways in which these prayers are dissonant with the Church’s own theology, and act to alienate rather than reconcile and restore. In both cases, she calls for Christians to respectfully but honestly work to understand, repair, and renew the tradition. In this task, the voice of women theologians is of especial value.

In Orthodox life, truths about the faith that are challenging to express in discursive language are often declared through the hymnography and iconography of the Church, and Dr. Frost discovered that this is the case with the topic of the maternal body, whether that of the Mother of God or of the other holy women whose birthgiving is celebrated in the Church. One of the pleasures of the book is this examination by Dr. Frost of the theological poetry of portions of Orthodox hymns, and of the extraordinary icons depicting times of pregnancy, birth and its aftermath, and breastfeeding, along with the color images of some of these icons. However, this is one area where Dr. Frost could expand her discussion. For example, she does not explore one of the most important and omnipresent icons of the incarnation, the Mother of God of the Sign, also called the Theotokos Platytera (wider than the heavens), which depicts the presence of Jesus in His mother’s womb. The icons that Dr. Frost selects to examine are rarer than this type and connect more directly with the experience of ordinary women, which is perhaps why she chooses them. Nevertheless, here and elsewhere the topic begs for further development.

Although in theory valuing material existence and the body, Christianity historically has reacted with everything from discomfort to outright hostility to the human body and most especially to women’s bodies. When that happens, the doctrine of the Incarnation weakens, and the good news of our salvation itself is threatened. Reflection on the maternal body leads us back to a proper appreciation and celebration of human bodies and women’s bodies, of procreation, birth, and development, and of what it means to be human from conception to transfiguration. This appreciation and understanding, the genuine teaching of the Church, should be what men and women experience in the prayers and rites of the Church, including those prayers associated with childbirth. Dr. Frost’s inviting and very accessible work is a small but much needed step in restoring this appreciation and providing this voice for the Church.