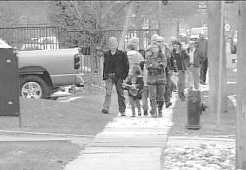 Members of the Church of the Holy Trinity in Salt Lake City, UT wait to enter the Church hall for a parish general assembly meeting. Metropolitan Isaiah of Denver did not allow certain “excommunicated” members to participate on Nov. 20.

BOSTON, MA – Metropolitan Isaiah of Denver “excommunicated” Archons of the Ecumenical Patriarchate, a member of Leadership 100, as well as the father of a professor of the Holy Cross Greek Orthodox School of Theology. Isaiah placed them “outside of the Church.” He did not allow them to participate in the Holy Trinity Salt Lake Utah General Assembly on November 20.

The general assembly voted 60% to 40% against Isaiah’s wish of Metropolitan and appointed the Parish Council to modify the Parish Regulations regarding the ownership of the Holy Trinity Parish’s property and assets and also the change of the Parish’s legal corporate name, which would lead to the Parish’s division into two.

The vast majority of the parishioners are against the split and they had expressed their strong opposition in the past. Of 575 voting parishioners, 348 voted for the Uniform Parish Regulations and 227 voted against them in what was a tense atmosphere. Six individuals who had filed a lawsuit against the Parish Council demanding a temporary court order to postpone the assembly and financial accountability were not allowed to enter the room. Among them was Nick Bapis, a prominent Utah businessman Archon of the Ecumenical patriarchate and member of the Leadership 100. Ironically, Bapis’ family has donated the entrance to the assembly room. Nonetheless, Bapis and the other five were kept out in the cold.

The Church assembly took place in heavy police presence while media provided extensive coverage. Isaiah had send his own emissaries to storm the assembly to persuade the voters, but as the results reveal, the majority of congregants simply disregarded them.

Neither of the priests – Michael Kouremetis and Mathew Gilbert – said a word at the assembly and Neither Kouremetis or Isaiah responded to TNH’s request for comment.

Metropolitan Isaiah in a letter on November 16 excommunicated the six congregants who had filed lawsuits, demanded them to submit written apologies to him, and to go to Holy confession. He wrote: “the following Parish members who instigated the lawsuit against the Church and its canonical Parish Council, as well as the attorney who presented their case, may not attend the General Assembly. They are Mr. Nick M. Bapis, Mr. Constantine Skedros, Mrs. Kaliope Sargetakis. Mr. Yiannis Armaou, Mr. James Kastanis, and Mr. Nick Colessides.” Isaiah also wrote that “after they submitted written apologies or have afforded themselves the Sacrament of Holy Confession for going to secular courts, which Saint Paul condemns (1 Corinthians 6:4-7), they will be recognized by me as faithful members of the Parish. I am hopeful that they will exercise humility and repentance and thereby eliminate the scandal they have caused against the parish.”

A few weeks ago the “excommunicated” ones, having exhausted all ecclesiastical avenues and means, filed a lawsuit in the 3rd District Court in Salt lake City against the Parish Council, seeking financial transparency, a temporary restraining order of the November 20 General Assembly, restoration of the process for an open general assembly, and free parish council elections. The Parish Council requested the court to dismiss the case. The court refused to dismiss the lawsuit and ordered the defendants to produce copies of the Parish’s records, but also denied the plaintiffs’ request for a temporary restraining order.

Armaou, who is among the “excommunicated,” told TNH that “I feel disappointed because Metropolitan Isaiah as our archpastor should have been here to resolve this issue, not through letters.” Armaou also said that “Metropolitan Isaiah does not allow us to participate in the general assembly and places us outside of the Church claiming that we filed a lawsuit against the church; that is wrong.” He explained that “we filed the suit against those eight members of the Parish Council who were not elected but appointed by the priest.” Armaou added “we never said anything against the doctrine of the Church, the Patriarchate, or the Archdiocese.” Armaou refuses to send any written apology to Isaiah: “Never. I’ll never do that, because I have not done anything wrong.”

Regarding Isaiah’s demand for confession, Armaou said “if Fr. Nicholas Katinas [he was accused of pedophilia and was defrocked]was alive I would prefer to go to him since he belonged to the Denver Metropolis, but now I have no other choice but to go to Fr. Demetrios Rekachinas in Connecticut.” He explained that “Mr. Constantine Skedros, who is among the ‘excommunicated’ ones is the father of Holy Cross Greek Orthodox School of Theology professor James Skedros”. As far as the attorney who presented the case, Armaou said “we have three attorneys: two are Jewish and one is either Episcopalian or Presbyterian.”

Isaiah’s plan to split the Church into two parishes disregards the majority’s wishes and defies the decision of the Holy Eparchial Synod of the Archdiocese and Archbishop Demetrios who agreed that “the Salt Lake community will remain as one united parish”.

The Parish was established by Greek pioneer immigrants in 1905 and now has approximately 1,300 families. To better serve its members, in 1969 the parish built a nave (church) Prophet Elias in the area of Holladay. Of the eight members of the current Parish Council, only two were elected by the Parish members, while the rest were appointed by the priest.

In March 2010, Prophet Elias was organized as a separate religious corporation and registered in Utah without informing the membership of the Greek Orthodox Church of Greater Salt Lake.

In a letter to the Salt Lake priests, Kouremetis and Gilbert, dated Oct. 6, 2010, Isaiah announced the split of the parish into two. On October 24 a special meeting took place attended by 450 people, 97% of whom voted against the split and decided on a Call to Action.

An icon of Christ was said to exude oil on Oct. 17, 2010 during the Divine Liturgy, which Isaiah declared a miracle. In a letter to Kouremetis on October 20, he wrote: “The Lord has answered our prayers asking Him to resolve the confusing situation in the Salt Lake City area regarding the two parishes.”

On Mar. 24, 2011 Demetrios sent a letter to Isaiah informing him that the Synod had revoked the new charter that the Archdiocese had granted on April 12, for Prophet Elias. The archbishop also wrote that “the Holy Synod in its meeting on March 17, 2011, reached consensus and agreed, the Salt Lake community will remain as one united parish.”