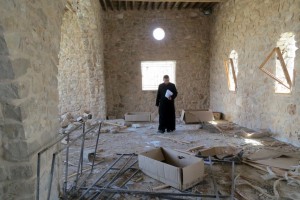 The Islamic State militant group (ISIS) killed scores of Christians when they captured a Syrian town recently liberated by the government, a Syrian Christian leader has said.

ISIS swept into the town of Al-Qaryatain in August 2015, kidnapping at least 230 civilians including dozens of Christians in the central Syrian town, which lies 104 kilometers (65 miles) southwest of Palmyra. The town had a population of some 2,000 Syriac Catholics and Orthodox Christians prior to the outbreak of civil war in Syria in 2011, but this had dropped to just 300 before ISIS took control.

Al-Qaryatain was retaken by Syrian government forces with the backing of Russian airstrikes earlier in April and reports are just beginning to emerge of life under the extremist group for civilians in the town. Patriarch Ignatius Aphrem II, the head of the Syrian Orthodox Church, told the BBC on Sunday that 21 Christians were murdered when ISIS first captured the city.

Some died trying to escape while others were killed for violating the terms of contracts they had signed requiring them to submit to the extremists’ interpretation of Islamic law. Hundreds of Christians in Al-Qaryatain were reportedly forced to sign so-called dhimmi contracts, which enabled them to live under ISIS rule in the town. The patriarch added that five other Christians are missing and presumed dead, while ransoms had been paid to ISIS to secure the release of the rest of the Christians.