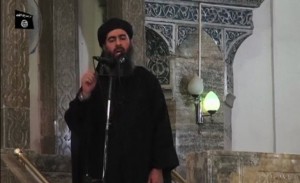 A man purported to be the reclusive leader of the militant Islamic State Abu Bakr al-Baghdadi has made what would be his first public appearance at a mosque in the centre of Iraq’s second city, Mosul, according to a video recording posted on the Internet on July 5, 2014.REUTERS/Social Media Website

Isis has announced that it is to convert one of Mosul’s largest churches into a mosque for the group’s “mujahideen” in notices posted in the streets exactly a year after the group launched a successful offensive on Iraq’s second city.

The radical Islamists distributed the notices around the city, which has been under the group’s control for a year to the day, announcing the conversion of the Syrian Orthodox Church of St. Ephraim, according to Fides, the Vatican’s news agency.

In the weeks before Isis advanced in June last year, the number of Christians in Mosul reportedly dwindled to 3,000 and following the offensive, residents reported churches and Christian shops being attacked. Consequently, it is believed that no Christians remain in the city.

The church is to be reopened by the group as a “mosque of the mujahideen”, a place where Isis fighters and supporters who believe in an ultra-conservative version of Islam, can pray and practice their faith. Local Iraqi media reports indicate that the group have also draped the church in their notorious black and white logo, with “There is no God but Allah” and “Prophet Mohammed” written on it.

As a sign of their intention to convert the religious building, the militants have removed the cross from the church’s dome, emptied the church of all of its furniture to sell on and used buildings within the premises to base their “state council” last year, the news agency reported.

Nuri Kino, founder and president of A Demand For Action, a group advocating the protection of ethnoreligious minorities such as Assyrians and Yazidis in the Middle East, says that the continuous attacks on Christian symbols by Isis shows that the group are continuing in their attempt to “cleanse” their caliphate.

“If so, it’s a scary development, until now they have bombed or, in other ways, destroyed churches but when they change [the church to a mosque], it feels more definite,” he says.

“A year ago they said ‘Convert, pay or die’ then it turned out to be a lie, that even if you pay you will not be able to stay,” he adds. “If they changed a church to a mosque it is further proof of their cleansing, something that many call a genocide. They destroy our artefacts, our churches and try to erase us in any way they can.”

Mosul was captured by Isis a year ago in an offensive that saw the terror group sweep across the Middle East, overrunning large swathes of territory in Iraq and Syria and taking control of Raqqa, the group’s de-facto capital, as well as Tikrit, which was liberated by Iraqi coalition forces in April.

The city, the capital of the northern Nineveh Province, was estimated to have a population of approximately 1.8 million at the time of the radical Islamist’s offensive but 150,000 were forced to flee their homes to avoid falling under the group’s rule.

The ultra-conservative group has routinely targeted minorities and symbols of other faiths in the city. Exclusive footage obtained by the BBC from within the city reveals how the homes of Christians have been marked for demolition.

Following their takeover of the city, Christians were warned to convert to Islam or pay jizya(a tax paid by non-Muslims) and were told if they did not do either they would have to leave the city or be killed.

Residents also reported churches and Christian shops being attacked and the radical Islamists reportedly opened a market to sell goods stolen from houses belonging to Christians, according to UK media organisation Christian Today.