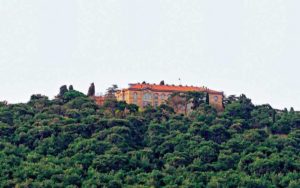 Halki seminary was a center of Orthodox scholarship for more than a century until Turkish authorities closed it down in 1971.

The Holy Theological School on the island of Halki (Heybeliada), one of the Princes’ islands in the Sea of Marmara, has remained closed for almost 50 years, yet not a year has passed without it attracting hundreds of visitors and international attention. However, it may soon be eclipsed by a more grandiose religious establishment. While negotiations about the reopening of the seminary remain ongoing, Turkish authorities have announced a plan to erect a colossal new Islamic educational center in the middle of the island.

According to an official announcement by Haydar Bekiroglu, president of the Turkish Directorate of Religious Affairs, a new center of Islamic studies spanning a total area of 200 acres is scheduled to be built on Halki, less than a kilometer away from the Orthodox seminary where no lessons have been held since 1971, following the introduction of a Turkish law banning private higher education institutions. Early last week Bekiroglu announced that the administration is already in talks with the local urban planning authorities, and hopes to get approval for the ambitious project soon.

The plans for the new Islamic educational center on the island off the coast of Istanbul are not an isolated incident. Over the past year, the Turkish government has made the expansion of religious education in major cities a clear priority. “It is urgent to strengthen the religious educational infrastructure in every corner of Istanbul, the cradle of our civilization,” said Bekiroglu in an official statement, adding that the majestic 200-acre institution will include dormitories that will host dozens of Islamic scholars from Turkey and abroad.

Despite minimal coverage by the Turkish press, the plans for the construction of the large Islamic education center just steps from the Halki Theological School have already sparked reactions across the country. “How do you expect this decision to affect interfaith dialogue?” asked Filiz Kerestecioglu, an MP with the liberal Kurdish Party, during a parliamentary session. He didn’t get any answers.

Korhan Gumus, an architect and active member of civil society on the Princes’ Islands, is leading efforts by a group of local activists who have vocally expressed their opposition to the construction plans in the protected and symbolically charged area of Halki. He describes the plans as an act of religious antagonism, adding that “with this action, the government wants to send a strong message to eradicate the historic past of the city and to threaten multiculturalism and the harmonious coexistence of diverse cultures.”

Aykan Erdemir, a former member of the Turkish Parliament and a senior fellow at the Washington-based Foundation for Defense of Democracies, agreed with the spirit of Gumus’s statements. “It is no coincidence that the Turkish government picked this spot of all places,” the Turkish researcher told Kathimerini. “This is a symbolic move to reassert Turkish and Muslim domination over Greek Orthodox subjects, and an attempt to transform the demography and cultural landscape of the island,” he added.

The intention of the Turkish authorities to build the mammoth Islamic educational center on Halki is particularly surprising given the cordial atmosphere that prevailed when Ecumenical Patriarch Vartholomaios met with Turkish President Recep Tayyip Erdogan and Minister of Foreign Affairs Mevlut Cavusoglu this past April. After the meeting, Vartholomaios optimistically announced that he received assurances that the Halki seminary would soon reopen as a theological school.