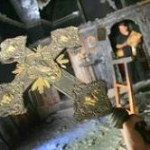 Getty Images:A damaged crucifix survives the burning of a Greek-Orthodox church in Tulkarem in the West Bank on Sept. 17, 2006.

Regarding Israeli Ambassador Michael Oren’s “Israel and the Plight of Mideast Christians” (op-ed, March 9): No doubt, his piece will be compelling for many readers. Christians in North America are generally sympathetic to Christians who suffer elsewhere. More negatively, many respond well when blame for that suffering is placed on Muslims. The biggest problem with Mr. Oren’s analysis, however, is that it stands in sharp disagreement with the perspectives shared by those he presumably wants to protect. Mr. Oren seeks to speak for Palestinian Christians before he has spoken with them.

Palestinian Christians have produced major studies of Palestinian Christian demographic trends. Difficulties created by Israeli occupation policies far outweigh pressure from Muslim neighbors as reasons for Christian migration from the West Bank. According to a study by the Bethlehem-based Diyar Consortium, “most of those who choose to emigrate” are “aggravated by the lack of freedom and security.” At “the bottom of the scale,” they found, “are family reunification, fleeing religious extremism and finding a spouse.”

It is irresponsible for Amb. Oren to make political points among some segments of the U.S. population by intentionally disregarding factors contributing to Palestinian Christian migration away from their homeland. By blaming their condition on Muslims alone, while ignoring the negative effects of Israeli occupation policies, including the debilitating economic effects of the separation barrier, Mr. Oren is using anti-Muslim sentiments among some Americans to hide the effects of Israeli policy. This cynical political rhetoric fuels extremism and does not promote peace.

I am a Palestinian Christian, and the numbers and facts given by Mr. Oren are erroneous and misleading. With the creation of the state of Israel, 80% of Palestinian Christians were forced into exile. The number of Christians in Jerusalem dropped dramatically since the occupation of the city in 1967, and Palestinian Christians are denied access to Jerusalem. To pretend that their numbers greatly increased contradicts all statistics, including Israeli statistics. Allowing “holiday access to Jerusalem’s churches to Christians from both the West Bank and Gaza” is denying free access, and those permits are given selectively, in small numbers and revoked often with the “closure” of the occupied territories. Pretending to defend the interests of the Christians contradicts facts on the ground, where Christians suffer the same consequences of military occupation as all Palestinians. Most of the land belonging to Christians in Bethlehem is being confiscated with the building of the separation wall. Is that the “respect and appreciation” the Christian community receives from the Jewish state?

I am one of those Palestinian Christians that Mr. Oren refers to, who live inside Israel. At no time in my life have I ever felt the “respect and appreciation” by the Jewish state which Mr. Oren so glowingly refers to in his last paragraph. Israel’s Christian minority is marginalized in much the same manner as its Muslim one, or at best, quietly tolerated. We suffer the same discrimination when we try to find a job, when we go to hospitals, when we apply for bank loans and when we get on the bus. In my daily dealings with the state, all I have felt is rudeness and overt contempt.

Amb. Michael Oren presents a distorted and inaccurate account of Christians in Palestine. He conveniently omits gross Israeli violations against the Palestinian Christian community, such as Israel’s revocation of residency rights to many whose birthplace was Jerusalem, or the fact that it restricts their right to worship in their holy sites by imposing an onerous permit system to access the Holy Sepulcher in Jerusalem or the baptism site on the River Jordan. Even family visitations between Gaza, the West Bank and Jerusalem are heavily restricted.

It doesn’t stop at that. Recently there has been a spate of attacks by Jewish extremists vandalizing Christian properties and spray-painting slogans denouncing Jesus and Mary and attacking Christianity.

Finally, Palestinian Christians are a vibrant component of Palestine’s social, cultural and religious fabric. Many of our most prominent figures in politics, academia and the arts are Christian. This is the case precisely because of a long history and deeply rooted culture of tolerance and integration in Palestine.

Ambassador Maen Rashid Areikat
General Delegation
of the PLO to the U.S.
Washington

A version of this article appeared Mar. 15, 2012, on page A14 in some U.S. editions of The Wall Street Journal, with the headline: Israel Really Isn’t All That Friendly to Its Christians.