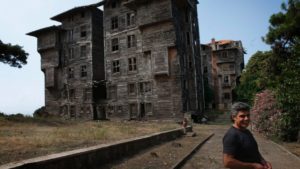 In this Saturday, July 21, 2018 photo, Erol Baytas, 56, the caretaker of the 6-floor timber building that once served as an orphanage for children of the minority Greek community, stands on its grounds, in Buyukada, the largest and most popular of the Princes’ Islands in the Sea of Marmara near Istanbul. The 120-year-old gigantic Prinkipo orphanage, occupying 20,000 square meters on a hilltop became home for some 5,800 minority Greek children from 1903 until 1964 when it was forced to shut down. (AP Photo/Lefteris Pitarakis)

BUYUKADA ISLAND, Turkey –  Each morning, Erol Baytas checks for further damage on the imposing but derelict timber building on an island off Istanbul that for decades housed orphans from the minority Greek community.

The scene on the hilltop on the island of Buyukada, the largest of the nine Princes’ Islands in the Sea of Marmara, looks more like the shattered remains of a horror movie set than the majestic hotel and casino complex that it was originally intended to be. Parts of the roof have caved in, wooden panels are missing and the kitchen stoves have rusted.

It’s quite a fall from grace for the 120-year-old building.

“Every day, a piece of the building falls out,” laments Baytas, the building’s 56-year-old caretaker.

“When it is raining, I go inside to survey the extent of the damage. Water will flow through every hole and it hurts me so much. I call them the building’s tears. I get emotional because it is my home, and before me it was the home of thousands of children.”

The building over six floors was originally designed by architect Alexandre Vallaury for the Compagnie Internationale des Wagons-Lits, the company which also ran the famed Orient Express. But when it was built in 1899, Ottoman Sultan Abdul Hamid II withheld his permission for it to operate as a hotel and casino.

The wife of a Greek banker later purchased it and donated it to the Istanbul-based Ecumenical Patriarchate of Constantinople, which then ran it as an orphanage.

The Prinkipo orphanage became home for about 5,800 minority Greek children from 1903 until 1964 when it was forced to shut down, a victim of political tensions between Turkey and Greece over the east Mediterranean island of Cyprus.

The building later became the subject of a drawn-out legal battle between the Ecumenical Patriarchate and the Turkish government, which confiscated it in 1997. It was returned to the Patriarchate following a European Court of Human Rights ruling in 2010.

Earlier this year, the cultural heritage organization, Europa Nostra, included it on a list of seven endangered monuments, but its fate remains unknown. The Patriarchate has said it wants it turned into an institute for environmental issue.

Istanbul — once Constantinople, the capital of the Byzantine Empire that was dominated by the Orthodox Church — was captured by the Muslim Ottoman Turks in 1453. Istanbul’s Greek population has dwindled to less than 3,000 in recent years, but the Ecumenical Patriarchate, the seat of the spiritual leader of the world’s Orthodox Christians, remains in the city.

Sitting under the shade by the St. Nicholas Orthodox church in Istanbul’s Yenikoy neighborhood, 80-year-old Vitleen Magulas still has vivid memories of Prinkipo, where she lived with her sister, from 1945 to 1951.

“At night, when the moon came up, it was as if you could hug it. We had very beautiful nights there,” Magulas said.

“We had a beautiful life there, better than in our own homes,” she said. “We were happy with everything, our clothes, our food . At that time, there were many Greeks in Istanbul and many benefactors. They gave donations to the orphanage. We had everything. They were taking good care of us when I was there.”

Baytas fears that the structure, which suffered a fire in 1980, may not survive another winter of neglect.

“I do not know how they will repurpose the building but it does not matter, as long as it is saved,” he said. “The building has been decaying for years but recently the deterioration has accelerated. This year it will not survive another winter if nothing is done.”