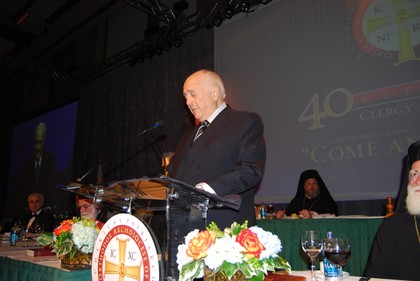 Analysis By Theodore Kalmoukos
Special to The National Herald

Michael Jaharis, Vice Chairman of the Archdiocesan Council, raised some very important issues about the life of the Greek Orthodox Archdiocese in America in his speech to the Council, which is published here.

He touched upon the problems that were created with the elevation of the local ecclesiastical districts to Metropolises. In essence, the current administrative structure refutes the unity and the coherence of the Church.

Ecclesiologically speaking, it is a very strange ecclesiastical and administrative structure simply because the Greek Orthodox Archdiocese of America is one unified Ecclesiastical Eparchy of the Ecumenical Patriarchate with only one ruling hierarch, the Archbishop of America, who should be commemorated in the Eucharist and in the Sacred Services as the shepherd (ruling bishop).

The metropolitans are not really ruling hierarchs but something in between auxiliary bishops and titular metropolitans, and thus should not be commemorated as shepherds.

When Archbishop Demetrios recently visited the Metropolis of Boston and he liturgized at the Cathedral on the occasion of the memorial service of the late Archbishop Iakovos, he was “the presider of the Eucharist” and he was commemorated as the shepherd, while the local Metropolitan simply assisted as a hierarch. That was very vivid to those in the congregation who understand the order and the canonicity of the liturgics.

Painful though it may be to contemplate, the sad reality is that unity of the Church and the withering of the parishes are in danger from the metropolitans themselves. The cases of the Metropolises of Boston and Denver are very vocal. They are tragic situations.

The monasteries, about 21 of them, which priest-monk Ephraim, former Abbot of the Philotheou Monastery of Mount Athos has established throughout the United States, are emerging as the Archdiocese’s most dangerous disease. It is already visible in so many parishes, which tend to become centers of a dangerous fundamentalism and distortion of our Orthodox Faith once they are infected. Unfortunately, we have the phenomenon of priests of the Archdiocese who become militant members of the fundamentalist movement of “Ephraimism.”

Jaharis made a special reference to the tragic death of novice monk Scott (Ioannis) Nevins last June under strange circumstances in a short distance from the monastery of St. Anthony of Arizona, which appears to be less a monastery than a resort in the Arizona Desert. The big question remains unanswered: where did Ephraim and his acolytes find the money to build all those monasteries in such short period of time?

Jaharis also mentioned the events at the Patriarch Monastery of St. Irene Chrysovalantou in Astoria, which has shaken our Greek-American Community.

It seems that Jaharis said much about so many serious ecclesiastical issues that none of the hierarchs has ever dared to say.