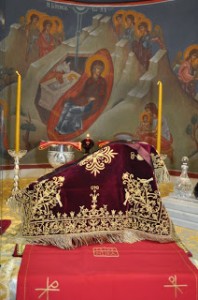 Five or six miles southwest of Jerusalem lay the tiny town of Bethlehem in the Judean hills. It was here that man’s eyes first saw God in the flesh. Why this place and not another of so many other possibilities?
Bethlehem was the perfect place for Christ to have been born. Of course it was the home of Joseph and Mary’s ancestors – the city of David. But it was more. Bethlehem was “the house of bread”. This is what the word Bethlehem means.
To have received such a name, Bethlehem must have produced some delicious bread, and the city’s ovens must have produced quite a sweet aroma.
When Mary entered Bethlehem, she was carrying in her womb something even more delicious and sweet than any bread Bethlehem had up until then produced. In her womb, like an oven, dough was being prepared of the most pure ingredients. Mary was preparing the Bread of Life, of the pure ingredients of her own virginity and obedience, the will of the Father, the divinity of the Son, and the grace of the Holy Spirit.
In the house of bread, the sweetest Bread was produced. The cave He was born in, was a heavenly bakery. “Taste and see that the Lord is good” (Ps. 34:8).
Jesus was not born in the house of royalty, nor the house of riches, nor the house of celebrity.
Jesus was not born in Jerusalem, nor in Rome, nor in Athens or Alexandria.
Jesus was not born in any political, commercial, cultural, educational, or socially significant city of the day.
When Micah, the Old Testament prophet, foretold the birth of Jesus in Bethlehem, he emphasized its lack of significance to the world.
“But you, Bethlehem Ephratha, though you be little among the thousands of Judah, yet out of you shall come forth unto me the One that is to be ruler in Israel: whose goings forth have been from old, from everlasting” (Mic. 5:2). 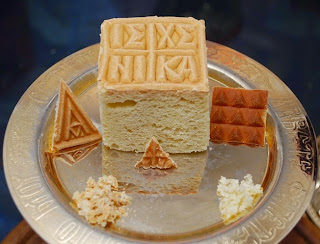 Bethlehem – “the house of bread”. Bread is one of life’s most common things. God wanted His Son available to all. His birth was announced to shepherds, the common man, but not to King Herod. His cradle was a manger, an animal’s feeding trough in a lowly stable. There is no human so low that he or she is outside the reach of the love of God!
Christ was born in Bethlehem, “the house of bread”, to satisfy our spiritual hunger. Jesus said, “I am the bread of life: he that comes to me shall never hunger” (Jn. 6:35). Bread is a good comparison to our Lord because He satisfies, gratifies and strengthens us spiritually just as bread does physically.
Many are eating at the wrong table.
“Wherefore do you spend money for that which is not bread? And your labor for that which satisfies not? Hearken diligently unto me, and eat that which is good, and let your soul delight in fatness” (Is. 55:2)
It is easy to get caught up in searching for meaning in life from the wrong things because there are a lot of things that bring temporary happiness. But only Christ satisfies the eternal dimension of the human spirit.
When the prophet Samuel informed Saul that he was God’s choice to be king of Israel, he foretold several things that Saul would see in the near future so that Saul would be confident the message was truly from God.
Among them was a man carrying three loaves of bread (1 Sam. 10:3). Three loaves were far more than Samuel could eat in a meal. He would have enough left over for future needs. It is a beautiful picture of the sufficiency of the work of the Triune God in the life of His servants. And it is typical of the sufficiency of God’s spiritual provision.
Christ is all the soul of man needs for spiritual satisfaction. The fact that Jesus was born in “the house of bread” gives us confidence that God does indeed want to choose us to be His children, no matter how insignificant we may seem to ourselves or to the world around us.
If one person eats a meal, it doesn’t satisfy any other person’s hunger.
The Bible says that “we are all partakers of that one bread” (1 Cor. 1:17). That “one bread” is Christ.
He is the only bread that offers life and the decision to receive Him is an individual one, but it is a bread that unites the Church, which is the Bride of Christ, into one Body, so the Church is also the Body of Christ, and Christ is the Head of the Church.
The question is not “have you become a church member?”, or “have you given to charities?” The question is, “have you given your life and your entire being to Christ?”
“But as many as received Him, to them gave He power to become the sons of God, even to them that believe on His name” (Jn. 1:12).
When an individual decides to receive Jesus of their own free will, they will become participating members in the Church, and in the Church we receive the gifts of God, His grace, and these gifts come to us through the Holy Mysteries, especially the Divine Eucharist, and by means of Bread and Wine, He enters us spiritually like bread enters us physically when we eat it.
Jesus Himself said,
“Behold, I stand at the door and knock: if any man hear my voice, and open the door, I will come in to him, and will sup with him and he with Me” (Rev. 3:20). 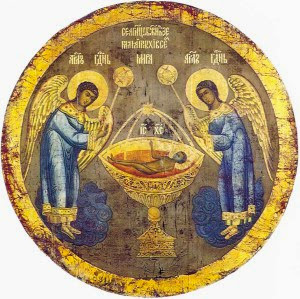 Christ was born in Bethlehem, “the house of bread”, so He could come into our hearts and give us new life in Him. He identified His birthplace with a place that produced bread, in order to show us that He comes into the world to be eaten, so as to be a source of life.
Every Divine Liturgy is a journey to Bethlehem. Every Divine Liturgy is a celebration of Christmas. Every Divine Liturgy gives us an opportunity to “taste and see that the Lord is good”.
Before every Divine Liturgy the priest prepares the Bread and Wine for the Divine Eucharist, which will be transformed during the course of the Divine Liturgy into the actual Body and Blood of Christ. The preparation table is called a Prothesis, and the service of preparation is called the Proskomedi. Typically in the apse of the Prothesis Table is an icon of the Nativity of Christ, because this section of the sanctuary represents the cave in which Christ was born. It is Bethlehem, it is “the house of bread”. Before the priest begins, he says:

“Make ready, O Bethlehem, for Eden has been opened for all. Prepare, O Ephratha, for the tree of life has blossomed forth in the cave from the Virgin; for her womb did appear as a spiritual paradise in which is planted the divine Plant, which by eating we shall live and not die as Adam. Christ shall be born, raising the image that fell of old.”

During the course of preparation, the priest places the Lamb on a Paten. The Lamb is the main portion of bread that will become the Body of Christ. The Paten, which typically has an engraved icon of the Virgin Mary, represents at this point the Virgin Mary, the Theotokos, or some would say it is the manger. When all the bread portions have been placed on the Paten, an Asterisk, or star-shaped covering, is placed over the Lamb of the Paten. This asterisk represents the star of Bethlehem.
All these things indicate that Christ’s birth in Bethlehem has sacramental significance for the Church, for He comes to us as Bread, and unless we eat this Bread, we can have no life in us.
He says:
“Truly, truly I tell you, unless you eat the flesh of the Son of Man and drink his blood, you have no life in you” (Jn. 6:53).
Therefore, like the shepherds who received the first Christmas greeting from the angels, let their reply be our reply:
“Let us now go even unto Bethlehem and see this thing which is come to pass, which the Lord has made known unto us” (Lk. 2:15).
[subscribe2]
Share. Twitter Facebook Pinterest LinkedIn Tumblr Email
Previous ArticleUkrainian Orthodox Church Canonizes Bartholomew (Bondarenko) the Fool for Christ (+ 1931)
Next Article Jesus Loves His Church, So You Should Too [An Important Reminder at Christmas]