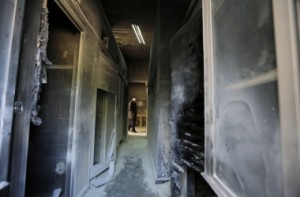 Reuters
An arson attack on a Greek Orthodox seminary in Jerusalem last week is one of a number of suspected hate crimes against Christians and Muslims in the area.

Christians and Muslims living on Mount Zion have been the target of numerous hate crimes in recent years, but representatives from all three religions are taking a stand against the intolerance by repairing the mount’s graveyards.

Last week a Greek Orthodox Seminary on the mount was the site of an arson attack in which one of the church’s bathrooms was set on fire. A wall was also sprayed with anti-Jesus graffiti, but no one was injured in the attack. Other incidents have seen gravestones smashed and people spitting at priests, and there has been little police intervention.

Before Pope Francis visited the Holy Land last May interfaith tensions increased in response to fears that the government would give the Vatican control of David’s Tomb, a building believed to be the site of the Last Supper. At the time there were demonstrations and calls for attacks on Christians living on Mount Zion.

According to Haaretz, posters calling for action against “the transfer of David’s Tomb to the Christians” have appeared again in recent days.

The posters say: “King David’s Tomb is in danger and you’re sleeping? Prepare for a global battle that will shake the entire world. Now, in the run-up to the election, the left-wing parties have promised, with help from Christian foundations, to help transfer David’s Tomb to the Christians.”

In response to this intolerance, some Israelis have been working with churches on Mount Zion to preserve gravestones that have been damaged, whether by vandalism or the effects of time.

The Protestant cemetery on the mount was the first to be restored in the initiative funded by the Society for the Preservation of Israel Heritage Sites, but the interfaith group plans to work on graveyards for all three religions.

Two years ago dozens of gravestones in the Protestant cemetery were smashed, including those of a number of notable figures who lived in Jerusalem in the 19th and 20th centuries.

“We did this to correct, at least a little, the bad impression left by the authorities’ failure to deal with the hate crimes,” architect Gil Gordon, who oversaw the repair work, told Haaretz. “They [the police]haven’t caught and indicted a single person, and the mayor is ignoring it. If you like, we’re doing this to rescue Israel’s honour, so they’ll know there are also people who care.”

Now that stonemasons have worked on the headstones, Jewish and Christian volunteers have begun cleaning up the cemetery. Next week the volunteers will begin work on the Muslim cemetery, and following that, a Jewish burial ground on the mount.

Discussions are also taking place about restoring the cemetery at the Armenian Church, with the supportof the Dajanis, a prominent Palestinian family who are the custodians of David’s Tomb and have also cared for Mount Zion’s cemeteries.

Historian Dr Yisca Harani, one of the project’s initiators, said the initiative was set up after a number of crosses in the Protestant cemetery were broken.

She added that the volunteers came to help “not just to show solidarity, but to show commitment and try to remind people that Jerusalem is a multicultural city where we all live, and will continue to live, side by side.”

After the work on the cemeteries has been completed, there are plans to create a tourist route that will include sites from the different religions and cultures on the mount.