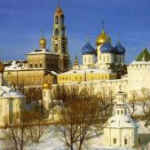 On March 16, 2012, a group of journalists accredited in Russia, the People’s Republic of China media (“Xinhua” news agency, China Central Television, China Radio International, China’s news agency, newspaper “People’s Daily”, “Guangming Daily”, “Economic Daily”, “Wen Wei Po”) visited the Trinity-Sergius Lavra . The trip was organized by the Russian-Chinese Business Council and the Department for External Church Relations of Moscow Patriarchate, with the support of the Ministry of Foreign Affairs of the Russian Federation and the Embassy of China in Russia.

In the city administration the Chinese journalists were welcomed by the head of the administration of urban settlements in Sergiyev Posad Y.A.Kalmykov and deputy chairman of City Council members V.V.Zaharov. The Mayor noted the special significance of the Trinity-Sergius Lavra as an Orthodox center of Russia. In 2014, the 700th anniversary of the birth of St. Sergius will be widely celebrated in Russia, which would entail an increase in the number of pilgrims and tourists. “It is gratifying, – said Y.A.Kalmykov – that your visit to our city is dedicated to the opening of the Year of Russian tourism in China. Much connects people and cultures of Russia and China and in our common history there are a lot of positive, we are good neighbors and friends. I urge you to cover wider for Chinese readers the spiritual, cultural and tourist potential of Sergiev Lavra “

Then the Chinese journalists visited the Trinity-Sergius Lavra, where they acquainted themselves with the spiritual and cultural attractions of the monastery of St. Sergius of Radonezh. In the Moscow Theological Academy and Seminary, guests were received by Archbishop Evgeny of Verey, Chairman of the Education Committee of the Russian Orthodox Church, and rector of the Moscow Theological Schools,.

“Russia and China – are good friends. Our friendship goes back to ancient times. At the root of our relationship was the Russian Spiritual Mission in China. Through her works the Chinese Autonomous Orthodox Church was established.” – said Archbishop Eugene. He told interested listeners that the Russian Orthodox Church perceived with great joy good measures of the Chinese side to normalize the situation of Orthodoxy in China. In the very near future Orthodox students from China will begin their education in religious schools. They will arrive in Russia on the basis of agreements reached between the Council for Cooperation with Religious Associations under the President of the Russian Federation and the China State Administration for Religious Affairs.

“We are also concerned about the fate of those students who previously received their own religious education in Russia, – Archbishop Eugene said in conclusion, – some of them, as we think could benefit their people.” Vladyka rector also answered the Chinese journalists’ questions. After the meeting, executive secretary of the Russian-Chinese Business Council V.N.Rostunov thanked Archbishop Eugene for the informative and interesting story and presented a symbolic gift in recognition.