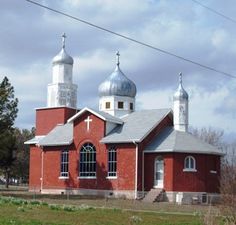 Parishioners of the historic Sts. Cyril and Methodius Russian Orthodox Greek Catholic Church in Hartshorne [OK] won a dispute over a temporary injunction Wednesday — at least until June, when an ongoing property dispute over the church could land the matter back in court.

During action at the Pittsburg County Courthouse in McAlester, District 18 District Judge James Bland issued an order Wednesday keeping a current restraining order in effect until June 1. Judge Bland is ready to revisit the matter if the property dispute is not settled by that time.

Following the ruling, a group of about 18 parishioners, their friends and supporters gathered in a courthouse lobby, joined by Tulsa attorney Addrienne Cash and Father Ambrose Arrington, of the Holy Apostles Orthodox Church in Bixby.

Many of the parishioners and their supporters considered the judge’s ruling a victory of sorts, but they were clearly unhappy to see another claiming a title to their beloved church. Workers in Hartshorne began constructing the church in 1897 and completed the job in 1916, according to the church cornerstone, making the church at least 100 years-old.

“It’s like having your history taken away,” said Janice Skimbo, a Wilburton attorney. Skimbo said she attended the Wednesday hearing because “My grandfather helped build that church and my grandfather was one of the trustees.

“This goes beyond what church is and to the history that’s been here since statehood,” she said.

Tessie Zozula Jackson, who attended the hearing with her husband, Walt Jackson, said, “There are sacred areas in the church that’s not supposed to be walked through or touched.” She said her father, Nick Zozula, and his brothers, Mike and Bill, had helped care for the church.

Susan Griffin, of McAlester, said she attended the Wednesday hearing to show support for her friends.

Father Arrington said he has previously conducted services at the Hartshorne church.

“I’m here because there was a wrongful sale of church property,” he said, maintaining the position of the Hartshorne parishioners. “It’s consecrated to God and should not be used for any other purposes.” The Hartshorne church is part of the Diocese of Dallas, he said.

Arrington said the church property was incorporated as a non-profit corporation in 2010 to try and avoid the kind of property dispute that’s still underway.

The property dispute began when Gregory Neal Melancon filed a quitclaim deed with the Pittsburg County Clerk’s Office on March 22, 2016, according to court documents. Melancon, who is not affiliated with the Orthodox Church in Hartshorne, presented a quitclaim deed said to be signed by Billl O’Nesky, a trustee of the church, court documents state.

In response, attorneys representing the Orthodox Church filed documents contesting Melancon’s deed, saying he was not authorized to execute a quitclaim deed on behalf of the church.

Attorneys representing the church said the property had already been transferred in 2010 via Special Warranty deed by church trustees Bill O’Nesky, Tanya O’Nesky and Foy Ledbetter, identified as successor trustees of the church, to a non-profit known as Sts. Cyril and Methodius Russian Orthodox Church, Inc.

The court order that remains in effect enjoins Melancon, as well as “his agents, employees, representatives, and all persons acting directly or indirectly by and through his instructions” from entering the church building and property at 501 S. Third St. in Hartshorne.

Melancon and the others are also enjoined against making any changes to church property, from taking any contents, and from coming within 100 yards of the church building and property while the order remains in place.

Melancon was not represented by an attorney during Wednesday’s brief court action. He approached the bench and listened to the judge’s order himself.

Following the ruling, Melancon quickly left the courthouse. The News-Capital approached him as he entered his vehicle, and asked to hear his side of the story. However, Melancon said his wife was late for an appointment and he did not have time to talk. He was given contact information for when he did have time.

On Tuesday, Melancon had declined to speak with the News-Capital and also declined to identify any attorney who might speak on his behalf. Court documents did not list an attorney of record for Melancon.

After the Wednesday hearing, Jennifer Laws, a part of the group representing the Hartshorne church, said she has faith the church will be saved.

“It’s good to see the support of the community and the church family,” she said.

“Mr. Melancon has been very cooperative and helpful,” she said. “We’re trying to see if we can reach a settlement.”