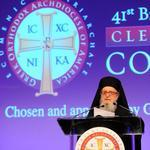 PHOENIX – The 41st Biennial Clergy-Laity Congress of the Greek Orthodox Archdiocese of America officially began its work this morning at the JW Marriott Desert Ridge Hotel. It was highlighted by the Keynote Address of His Eminence Archbishop Demetrios of America presented to an audience of more than 1,200 participants. It is customary for the official opening to be attended by delegates, clergy and laity, of both the Clergy-Laity Congress and National Philoptochos Convention.

Archbishop Demetrios defined the mission and outlined the steps necessary for the fulfillment of the theme of this Congress with the charge by our Lord Jesus Christ, who has chosen and appointed us to go and bear fruit.

His Eminence began his Keynote Address by expressing gratitude to God and devotion to His All Holiness Ecumenical Patriarch Bartholomew along with wholehearted wishes for the Patriarch’s 20th anniversary in the throne of Constantinople. He also expressed thanksgiving to God for a series of people, organizations and events which have had a significant impact on the life of our Church over the past two years. (See the full text of the Keynote Address at http://www.goarch.org/news/2012congresskeynote).

“The world to which we have been appointed to go and bear fruit is a wounded world, a confused world, a fragmented world, in which we have to cultivate and offer the fruit of faith, love, healing, peace and hope,” said Archbishop Demetrios as he outlined seven fields that should be the focus of cultivation so they can bear fruit in the time to come. He identified these fields as 1) the lives of families of interfaith marriages, 2) children, adolescents and young adults, 3) places of work where we communicate effectively our faith, 4) gathering and re-connecting our disconnected people, 5) inter-orthodox relationships, 6) increasing our stewardship numbers in our communities, and 7) preserving our universal Hellenic treasures and Greek language.

“Let us not waste time. Let us go now.  The field is open, wide open by the grace of God, Who was, is and will forever be with us,” concluded the Archbishop.

The opening ceremony began with a prayer service, followed by welcoming remarks from the two co-chairs of the Congress, Theofanis Economides and Isidoros Garifalakis. Councilman Jim Waring, representing the City of Phoenix also offered a warm welcome, followed by the President of the National Ladies Philoptochos Society Aphrodite Skeadas, who offered greetings on behalf of the twenty-five thousand women represented in this vibrant, philanthropic organization of our Church in America.  Finally, the host Hierarch Metropolitan Gerasimos of San Francisco addressed all the participants and offered inspirational words of pastoral love and care. He outlined the unique role of our Clergy Laity Congresses in promoting unity, fully disclosing the affairs of the Church and bringing together all parishes. Metropolitan Gerasimos urged the delegates to actively participate and take the message of the Congress back to their communities.

Immediately following the opening ceremony, the Metropolitans of the Holy Eparchial Synod held separate hierarchal sessions that were very well attended. The theme of the Congress was further discussed during these sessions giving the opportunity for the delegates to exchange experiences and new ideas and to benefit from the guidance of the Hierarchs.

During the course of the afternoon, several meetings and workshops took place including the Philoptochos General Assembly, meetings of the Church Musicians and Administration Committee, and various ministry workshop sessions.

Later in the evening the participants planned to attend a social outing at the old West style Pinnacle Peak Patio in the dessert.

For texts of the Keynote Address and Patriarchal Message, photos, daily updates, and schedules, visit the Congress web site at www.clergylaity.org.