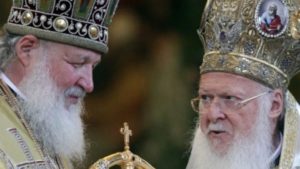 The Patriarch of Moscow will travel to Constantinople on the 31st of August. The theme of autocephaly (independence) of the Orthodox Church of Kiev is on the agenda. The request came only from the Ukrainian president, but is also supported by Orthodox in Ukraine and by the Greek-Catholics. Predictions of victory for Bartholomew I, who has a “primacy of honor” among the Orthodox.

Moscow (AsiaNews) – Kirill (Gundjaev), the Orthodox patriarch of Moscow, is scheduled to meet BArtholomew I (Archontonis), the ecumenical patriarch of Constantinople on August 31st next.

The meeting was announced by the secretariat of the Holy Synod of Constantinople: “During the visit – the statement said – several issues of common interest will be discussed”. According to the statement there is little doubt that the main purpose of the visit is the definitive clarification of the question on the possible autocephaly of the Ukrainian Orthodox Church, now under the jurisdiction of Moscow.

In July of this year a delegation of the Ecumenical Patriarchate went to Moscow, on a visit to Patriarch Kirill, after a round of visits to the other Orthodox Churches. There are 14 autocephalous churches recognized by Constantinople in the Middle East, the Balkans and Eastern Europe, as well as some Churches not recognized or recognized only by some others. So far, Bartholomew’s leanings on the Ukrainian question unclear, as are those of the majority of other Orthodox hierarchy.

The National Churches’ request for autocephaly, completely detaching it from that of Moscow, was addressed in April to the Ecumenical Patriarchate by the Ukrainian Parliament and by the President Petro Poroshenko, without an explicit intervention of any Orthodox bishop in the country.

However, it is known that not only the Orthodox of the non-canonical Church of Patriarch Filaret (Denisenko), who left Moscow in 1992, but also many bishops, priests and faithful of the Moscow jurisdiction support independence as well as  members of other small Orthodox communities, and even some Greek-Catholic Ukrainians.

The part that remains loyal to Moscow represents more than half of the Ukrainian Orthodox, led by the metropolitan of Kiev Onufrij (Berezovsky). In reality, Onufrij is not subservient to the patriarch of Moscow, being independently elected by the Ukrainian Synod, even if he participates in the Moscow synod that reserves the right to approve or reject his decisions. The figure of Onufrij is much appreciated for his balance in the contest between the Churches, and a possible solution would be the joint approval of his nomination as patriarch by Moscow and Constantinople.

In reality, the patriarch of Moscow hopes to obtain confirmation of his protection of Ukraine, which represents a very considerable part of all Russian Orthodoxy. The fact that he decided to go to Istanbul in some way marks a victory for Bartholomew, who can express his “primacy of honor” by receiving the head of the Muscovite “daughter” Church. The last meeting between the two took place in January 2016 at the offices of the Ecumenical Patriarchate in Switzerland, in Chambesy, during the Assembly of Heads of Orthodox Churches autocephalous (photo 1).

One month later, that meeting was followed by the historic encounter between Kirill and Pope Francis in Havana, which had given the Russian patriarch a special role of “diplomatic” primacy in the world of Christianity; in June of the same year, Kirill led to the failure of the first Pan-Orthodox Council in history, refusing to go to Crete in solidarity with the Bulgarians and Georgians. Bartholomew was forced to preside over a halved Council, demonstrating his weakness in the face of the Muscovite confrere.

Kirill had visited Constantinople in July 2009, after his election to the patriarchal throne, and Bartholomew had returned the visit the following year (photo 2). Beyond the historical antagonism between the two main exponents of Orthodoxy, the next meeting will have to definitively close the contradictions of this period, and mark a new season of Orthodox rebirth could begin for all the Churches.