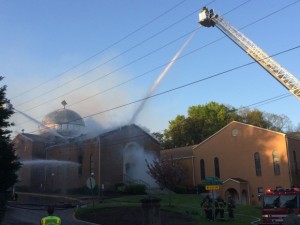 By Hailey Holloway, 6 On Your Side Reporter

KNOXVILLE (WATE) – Firefighters were still sifting through rubble, but that did not stop church members at St. George Greek Orthodox Church from gathering together to put their church back together.

The sanctuary of the church burned for several hours Sunday morning, which also happened to be the day the Greek Orthodox celebrate Easter. Church members said they were both shocked and heartbroken.

“I’ve been raised to help my church in any hour, good and bad, and this is the worst hour we’ve had here at St. George,” said church member, Tina Peroulas. She volunteered to help clear out the church social hall. Even though the sanctuary is crumbling, church staff said services will continue because of volunteers.

A group spent Monday cleaning holy artifacts spared in the fire. Peroulas said she volunteered not only to help the church, but also so that she would have someone to lean on during such a difficult time.

“There are probably easier ways to do it but it’s a great way to bring us all together in this. I think we all need this as a community,” said Peroulas.

A lot of the volunteers haven’t seen the inside of their sanctuary, many don’t want to, but those who saw pictures or watched it burning on the news Sunday said the shock of seeing it Monday is much worse than they were expecting.

“It was more than I thought it was going to be from pictures that I saw on TV and on Facebook. It didn’t look as bad as it does now,” said another member, Irene Manikas. Manikas has been a member at St. George Greek Orthodox Church for 34 years. She said it’s really hard to see the church, especially around Easter, but seeing the congregation come together help is uplifting. “It’s great to be a family. It’s like having a family. This is our church family and it’s sticking together,” she said.

Volunteers found a lot of positive stories coming out of the tragedy, including a special item, spared in the fire, that church members called a sign straight from God. 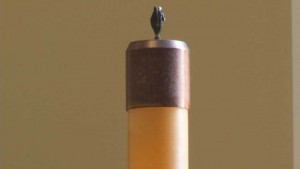 The Easter candle, the resurrection candle, is the candle that symbolizes the presence of the mystery of the risen Christ.

Every Easter, the priest lights a “resurrection candle” – a symbol of Christ rising from the dead. Church members say it was the only candle spared in the fire.

“It’s a miracle that that candle survived and didn’t melt with all of the others. It was the only one remaining in the church,” said Kathy Natour, a St. George member for more than twenty years. She believes the candle is a sign straight from heaven, and one the congregation needed after the tragedy.

“That is god sending us a message that it truly is a miracle and we can pick up and renew our church and rebuild it,” she said.

Father Anthony Stratis thinks the fire was started from an electrical issue, but according to the fire department, it’s still under investigation. A Knoxville Fire Department spokesperson said neither an electrical problem, nor the half a dozen lit candles just inside the sanctuary have been ruled out as possible causes.

Father Stratis said he had heard there was a scam donation site set up. He said it is not affiliated with the church.

The church’s official donation site is through YouCaring.com.