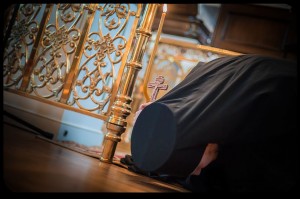 In his tireless work for Christian unity, St. John Paul II often expressed the hope that Christianity in its third millennium might “breathe again” with its “two lungs:” West and East, Latin and Byzantine. It was a noble aspiration. And when he first visited Orthodoxy’s ecumenical patriarchate of Constantinople in 1979, perhaps the successor of Peter imagined that his heartfelt desire to concelebrate the Eucharist with the successor of Andrew would be realized in his lifetime.

It wasn’t to be, but not for lack of trying on John Paul’s part. Contentions within Orthodoxy; Russian Orthodox resentments (and worse) over John Paul II’s pivotal role in the Revolution of 1989; and a deeply engrained sense among some Orthodox Christians that not-being-in-full-communion-with-the-bishop-of-Rome is a defining element in Orthodox identity—all these conspired to frustrate John Paul’s desire that the East/West fracture formalized at the beginning of the second millennium (in 1054), could be healed by the Great Jubilee of 2000, so that Rome and Constantinople might undertake the new evangelization in the third millennium, together.

Those frustrations have been compounded in the post-John Paul II era by the increasingly aggressive actions of the Russian Orthodox patriarchate of Moscow, within the Orthodox community of churches and on the global stage. Not to put too fine a point on it, Moscow, which has long imagined itself the “Third Rome,” seems less interested in unity within the family of Orthodoxy, and between East and West, than with asserting itself over-against the “Second Rome,” Constantinople, and with supporting Russian foreign policy. Those obstacles to a Church “breathing again with both its lungs” are not going to be resolved by kowtowing to the patriarchate of Moscow and tacitly accepting its dubious “narrative” about the history of Christianity among the eastern Slavs: a distortion that, by privileging Moscow and subordinating Kyiv, buttresses the revanchist aggression of Vladimir Putin’s Russia—not coincidentally, one assumes.

Herewith, then, what seems a self-evident ecumenical axiom: For so long as the leaders of Russian Orthodoxy aspire to hegemony within Orthodoxy, claim to be the sole legitimate heirs of the baptism of Rus’ in 988, and act as agents of Russian state power in world politics, for just that long will Russian Orthodoxy be a serious obstacle to a more unified Orthodox world and to reconciliation and full communion between Catholicism and Orthodoxy.

Yet what seems so clear to others is, somehow, not self-evident in the halls of the Pontifical Council for Promoting Christian Unity. In a recent interview with Vatican Radio, the pontifical council’s president, Cardinal Kurt Koch, said that “the changes in 1989 (that is, the collapse of communism in central and eastern Europe) were not advantageous for ecumenical relations” because “the Eastern Catholic churches banned by Stalin re-emerged” from underground—and that made life difficult for Roman ecumenists, given Russian Orthodox phobias about “Uniate churches” like the Ukrainian Greek Catholic Church, Byzantine in liturgy and polity but in full communion with Rome.

What is going on here? No local Church in modern times suffered more for its fidelity to Rome than the Greek Catholic Church in Ukraine—the world’s largest underground religious community between 1946 and 1989. Was Cardinal Koch suggesting that it would have been better for “ecumenical relations” if the communist crack-up in 1989 hadn’t occurred and if the Soviet Union had remained intact? It’s bad enough to be subjected to ex-KGB officer Vladimir Putin’s laments about the Soviet crack-up being the greatest geopolitical disaster of the 20th century; it’s even worse when the Catholic Church’s top ecumenical officer expresses what seem, at first blush, to be ominously parallel sentiments.

Now I don’t really think that Cardinal Koch wishes the Berlin Wall, or the Soviet Union, back. But his unfortunate formulation, which reflected certain institutionalized notions in the Roman Curia, confirmed that the Vatican’s ecumenical default positions badly need re-setting. And that re-set must begin with a clear-eyed view of recent Russian Orthodox prevarications and aggressions. Nothing will be gained, ecumenically speaking, from further kowtowing to the self-styled “Third Rome.”

George Weigel is Distinguished Senior Fellow of the Ethics and Public Policy Center in Washington, D.C.