STATEMENT – The recently enacted Basic Law: “Israel, the Nation-State of the Jewish People” is a cause of great concern. Seemingly enacted for internal political reasons, while defining Israel as the nation state of the Jewish people, the law fails to provide any constitutional guarantees for the rights of the indigenous and other minorities living in the country. Palestinian citizens of Israel, constituting 20% are flagrantly excluded from the law.

It is beyond conception that a Law with constitutional effect ignores an entire segment of the population, as if its members never existed. The law might not have practical effects, yet it sends an unequivocal signal to the Palestinian citizens of Israel, to the effect that in this country they are not at home. The Arabic language has been downgraded from an official language to a language with “a special status”, and with the commitment to work on the development of Jewish settlement in the land, with no mention of the development of the country for the rest of its inhabitants.

This Basic Law is exclusive rather than inclusive, disputed rather than consensual, politicized rather than being rooted in the basic norms that are common and acceptable to all fractions of the population.

This discriminatory law directly contravenes the United Nations General Assembly Resolution 181, as well as Israel’s own Declaration of Independence. The first guaranteed the establishment of a Jewish State while ensuring full civil rights to the Arabs living therein and in the Second, the founders of the Country clearly and unequivocally committed to foster its development for the benefit of all its inhabitants and to ensure complete equality of social and political rights to all, irrespective of religion, race or sex.

Finally, this law contravenes and contradicts the Basic Law: “Human Dignity and Liberty” enacted in 1995 that guarantees the respect of the dignity of every person. Where there is discrimination, there is no dignity.

In other words, the law says that there are not equal rights between Jews and Arabs and refuses to acknowledge their existence.

It not enough to have and guarantee individual rights. Any state with large minorities ought to recognize the collective rights of these minorities, and guarantee the preservation of their collective identity, including their religious, ethnic and social traditions.

The Christian citizens of Israel have the same concerns as any other non-Jewish communities with respect to this Law. They call upon all citizens of the State of Israel who still believe in the basic concept of equality among citizens of the same nation, to voice their objection to this law and the dangers emanating thereof to the future of this Country.

Israel: A battle over identity and democracy 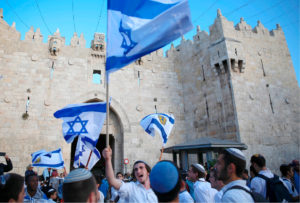 The new law defines Israel as the nation state of the Jewish people.
AP

[July 27, 2018]  Israel is a Jewish state, said Giulio Meotti in Arutz Sheva. It’s an irrefutable fact, yet one that has never been codified into Israeli law. That’s why last week, the Knesset voted 62-55 to approve a new Basic Law—a law with constitutional force that can be changed only by a majority in the legislature—that officially defines Israel as the national homeland of the Jewish people. The law, championed by Prime Minister Benjamin Netanyahu, states that “the realization of the right to national self-determination in Israel is unique to the Jewish people.” It adds that a “united Jerusalem” is the capital of Israel, that Hebrew is the country’s official language, and that the state should “encourage and promote” Jewish settlement. This law is necessary because Palestinians still don’t recognize our right to a homeland, and Israeli Arabs are growing in strength. Without a nationality law, the law of return that grants Jews throughout the world the right to immigrate here could be overthrown as discriminatory. Our flag with the Star of David could be challenged as racist, as could the menorah symbol. “This law protects all these.”

The problem isn’t what the national law says but what it omits, said Susan Hattis Rolef in The Jerusalem Post. Specifically, Israeli Arabs, who make up 20 percent of the population and “whose rights—especially the right to equality—are totally ignored.” This law downgrades the Arabic language from an official national language to one with a “special status.” Worse, its fuzzy conflation of the Land of Israel and the State of Israel could legalize the expansion of settlements throughout Palestinian territories. No wonder that when the vote was tallied, Arab members of the Knesset ripped up their copies of the law in protest. Israeli Arab lawmaker Ayman Odeh said Israel had “passed a law of Jewish supremacy and told us that we will always be second-class citizens.”

The entire point of the law is racist, said Mordechai Kremnitzer in Haaretz. The state doesn’t need a constitutional provision to settle Jews—it’s been doing that. “It only needs it in order to discriminate against non-Jews and segregate them.” What’s next? Apartment-for-rent ads that specify Jews only? Jobs for Jews only? This bigoted law will aggravate Israeli Arabs’ alienation from the state. But Netanyahu is happy to sow “separatism and factionalism between Jews and Arabs” to cement the support of hard-liners in his base and the ultra-Orthodox parties in his ruling coalition. We have strayed from the values in our noble Declaration of Independence, said Yedidia Stern in Yedioth Ahronoth. It calls Israel the national home of the Jewish people, but also pledges “full equality” for all citizens, regardless of religion, race, or gender. Remember, the Torah commands one law—“both for you, and for the stranger that sojourneth with you.” In insisting on our Jewishness, are we rejecting the values of Judaism?