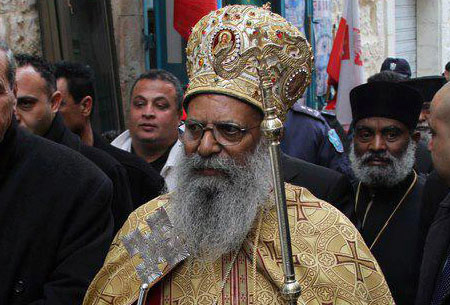 ADDIS ABABA, Ethiopia — In his Easter message this week, Patriarch Abune Mathias, head of Ethiopia’s Orthodox Church, vowed to fight homosexuality, saying it will bring destruction to the world.

Mathias warned that the “sin that burnt Sodom and Gomorrah in Ethiopia not only erodes the holiness that God has bestowed upon Ethiopians, but it will bring destruction and damage, rather than development and growth.

“To prevent this I call upon all Ethiopians to fight this grand sin of Sodom persistently,” he added.

“I would like to confirm to all Ethiopian that the Ethiopian Orthodox Church will fight this grand sin fiercely to the end,” he said. “It is outside of God’s and Nature’s laws. Everyone should resist it. It is unnatural. It is condemned in the bible.”

Last year, the Patriarch posted on Facebook that “homosexuality is not natural and we in Ethiopia must not accept this ungodly behavior.”

Meanwhile, a planned anti-gay rally by Weyneye Abune Teklehaimanot, a group associated with the Ethiopian Orthodox Church, has been cancelled, according Redwan Hussein, a government spokesman.

Redwan also stated that a bill to add gay sex to a list of crimes not eligible for presidential pardons has been dropped by Ethiopia’s legislators.

A 25-year jail term is given to anyone convicted of infecting another person with HIV during same-sex acts.

In addition, under its anti-terrorism law anyone who states what the government deems terrorism (which can include human rights criticism) can be imprisoned for 20 years, without a warrant.

Ethiopia’s anti-advocacy law bars charities and nongovernmental organizations that receive more than 10 percent of their funding from abroad from participating in activities that advance human rights and the promotion of equality.

LGBT advocates say the laws make it impossible for any health services, charity, advocacy or even clubs or bars to openly support or cater to Ethiopia’s LGBT population.