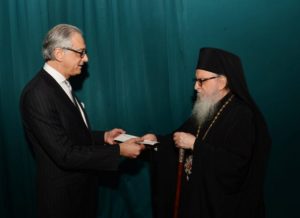 Former chairman of Leadership 100 George Tsandikos gives a check to Archbishop Demetrios for the ministries of the Archdiocese. (Photo by GOA)

BOSTON, MA – Leadership 100 will pay $200,000 to cover the expense of the banquet for the 44th Clergy-Laity Congress, which will be convened from July 1 to 5 at the Copley Marriot Hotel in Boston, where the same event was held in 1988 under Archbishop Iakovos.

Leadership 100 has in its coffers about $100 million and gives annually approximately $2 to $2.5 million for the ministries of the Archdiocese. It is not clear if according to the rules the organization can provide funds to pay for the event, and Leadership has not announced anything officially as yet.

The Copley venue was chosen two years ago by since-ousted Archdiocese Executive Director Jerry Dimitriou, who placed a deposit to reserve the hotel but never even notified the local hierarch, Metropolitan Methodios of Boston.

Typically, the announcement about the Clergy Laity Congress is made early on so that proper preparations can be made and so that parishes can have the chance to convene general assemblies to assign delegates and appropriate the necessary funds to pay for the delegates’ expenses to attend.
The registration prices follow:

But this time, due to the Archdiocese’s dire financial situation, the announcement delayed considerably. At the October 20 Archdiocesan Council meeting, Archbishop Demetrios announced the convening of the Congress and charged the Boston Metropolis with its organization. From that point until February 27, no substantial action was taken toward such organization. It is reminded here that businessman and philanthropist George Behrakis was asked to chair the Congress, but refused, despite Demetrios’ pressing requests.

Anton sent a letter to his friends in Leadership 100, the Order of Archons of St. Andrew, the Archdiocesan Council and others in the Boston area and across the country, asking for money.

To date, no agenda has been set, except for the theme, given by Demetrios: “All Things Are Possible to the One Who Believes in Christ” (Mark 9:23).

Notably, the Boston Metropolis has not held its own local Congress this year or last, and has not yet released even a vestigial financial report or other notice of financial accountability.

In a special encyclical, Demetrios wrote: “I join with the beloved and respected Hierarchs of the Holy Eparchial Synod and the members of the Archdiocesan Council in announcing that our 44th Biennial Clergy-Laity Congress and the national meeting of the Greek Orthodox Ladies Philoptochos Society will convene July 1 to 5, 2018, in Boston, Massachusetts. We offer our sincere gratitude to His Eminence Metropolitan Methodios and the leadership, clergy, and laity of the Metropolis of Boston for their willingness to host the 44th Clergy-Laity Congress of our Archdiocese and to welcome the leaders of our parishes and organizations from throughout our blessed country.

Our theme for the Congress will be ‘All Things Are Possible to the One Who Believes in Christ.’ As Orthodox Christians we affirm our faith in Christ, a faith that makes the impossible possible, the unreachable reachable, the non-achievable achievable. We know that our faith in Him leads us in our worship and ministry.”