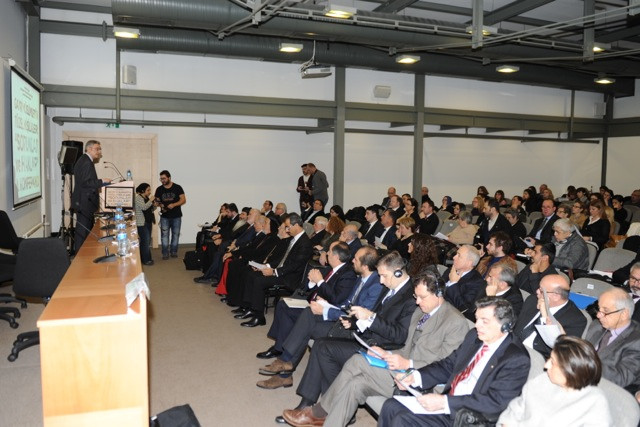 Source: Order of St Andrew the Apostle – Archons of the Ecumenical Patriarchate

On behalf of the Order of Saint Andrew the Apostle, on January 30, 2014, the Honorable B. Theodore Bozonelis, Archon Ekdikos and Regional Commander of New Jersey, attended a conference in Istanbul, Turkey sponsored by Bilgi University Faculty of Law in partnership with Community (Minority) Foundations and the Council of European Human Rights (the Venice Commission). The topic of the conference was Legal Entities of Non-Muslims: “Problems and Rights”.

Laki Vingas, as the duly elected representative of all Minority Foundations to the government of Turkey’s General Directorate of Foundations, organized the conference which featured speakers and panelists from the Turkish government, the Venice Commission, academia and attorneys. In addition to the speakers and panelists, the conference had over 150 participants which included embassy and consulate diplomats from the United States, Canada, Australia, the United Kingdom, and many other countries, as well as European Union representatives, and Turkish officials, including the Deputy Minister to the European Union, the Turkish Ombudsman and  the Vice President of the Diyanet (Office of Islamic Religious Affairs). In this regard, Judge Bozonelis, representing the Order, had the opportunity to interact with the speakers, panelists and participants on issues central to the Ecumenical Patriarchate.

Opening remarks were presented by Dr. Turgut Tarhanli, Bilgi University Dean of the Faculty of Law, Dr. Alaattin Buyukkaya, Turkey’s Deputy Minister to the European Union, and Mr. Vingas, as the representative of Minority Foundations. Their remarks focused the conference on the legal restrictions and problems of minority non-muslim foundations in Turkey and the lack of a legal personality (status) for the Ecumenical Patriarchate and other non-muslim religious organizations. Following the opening remarks, a panel of professors from Bilgi University’s sociology and political science departments discussed the history and development of community (minority) foundations in Turkey. The use of the term “non-muslim” itself was referenced as being discriminatory in that the Turkish government segregates and codes minority religious groups rather than referring to all such individuals as Turkish citizens in their own right.

Expanding on this topic, Dr. Konstantinos Tsitselikis, University of Macedonia, Thessaloniki, moderated a panel comprised of Dr. Adnan Ertem, Turkey’s General Director of Foundations, Dr. Christoph Grabenwarter, representative of the Venice Commission and a Judge of the Constitutional Court of Austria, Mine Yildirim, Freedom of Belief Project Director, Norwegian Helsinki Committee, and Mr. Vingas on behalf of minority foundations. They addressed the negative effect of Turkey conditioning minority rights on “reciprocity” with Greece under the Treaty of Lausanne. All agreed that religious freedom and human rights were superior to any claims of “reciprocity” and the two concepts were completely separate and distinct. The panel referenced Turkey’s refusal to recognize the term “Ecumenical” for the Patriarchate as an example that its government should not interfere in soley religious matters. In addition, the panel referenced Article 9 of the European Convention on Human Rights, Council of Europe, of which Turkey and Greece are members, to evidence the supremacy of human rights over a states’ reciprocity issues between governments.

Mr. Vingas also commented and emphasized that in addition to legal personality issues, Turkey’s decision not to allow scheduled elections for board members of minority foundations has created a serious problem of control for minority foundations loyal to the Ecumenical Patriarchate and other religious minority leaders, especially in efforts to merge foundations that lack sufficient resources. Turkish government regulations call for such elections every 4 years but Turkey has refused to enforce the same.

The conference concluded by the speakers, panelists and participants offering potential solutions to resolve and enforce minority rights. One such solution discussed was to have the new proposed Turkish Constitution look to a restructuring of minority foundation laws and allow a legal status, even if limited in scope, to minority religious groups without the need of further court actions. Also, at the conclusion of the conference, Judge Bozonelis had the opportunity to offer the Order’s assistance in a meeting with Yannis Ktistakis, legal counsel to the Ecumenical Patriarchate, and Patriarchal Deacon Joachim Billis, a lawyer and Deputy Secretary to the Holy and Sacred Synod, on the progress of the return of confiscated properties to foundations loyal to the Ecumenical Patriarchate and on proposed efforts to transfer properties into the name of “Rum Patrikhanesi” (Patriarchate of the Roman Greeks) and/or the Ecumenical Patriarchate to test the creation of a legal status.