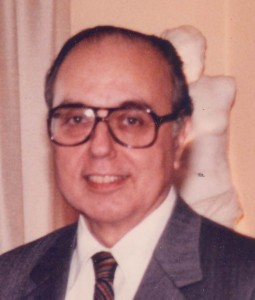 Leon Marinakos was a US Army veteran and a graduate in Electrical Engineering from the Illinois Institute of Technology, becoming Manager of Product Planning at General Electric Company and later Manager of Engineering at Hobart Corporation.

He valiantly defended his Greek Orthodox Faith in the political and intellectual world, and served his Church as a parish council member and advanced bible class teacher. In recognition of his countless services, he was invested by His All Holiness the Ecumenical Patriarch of Constantinople as an Archon of the Order of Saint Andrew the Apostle. The Patriarch of Jerusalem bestowed on him the title of Crusader of the Order of Orthodox Crusaders of the Holy Sepulchre.

His love and appreciation of his Greek heritage inspired him to produce over 100 illustrated lectures which he presented throughout North America and Europe, as well as at the Art Institute of Chicago. He was a founding member and president of the Classical Art Society of the Art Institute of Chicago, a founding member of the United Hellenic American Congress (U.H.A.C.), and Chicago’s Hellenic Museum and Cultural Center. The Greek Government appointed him Cultural Attache (Honorary) to the Consulate General of Greece in Chicago, and he served as president of the prestigious Hellenic Professional Society of Illinois.

He will be remembered as a major contributor to the enrichment of the religious and cultural life of all who knew him as a virtuous, principled, and Christian man.