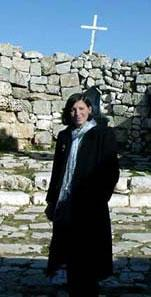 His Eminence Archbishop Demetrios of America
Chairman, Assembly of Canonical Orthodox Bishops of the United States of America

I pray and hope you will have a blessed new ecclesiastical year, and I respectfully request that you extend my best wishes to the Assembly of Canonical Orthodox Bishops for a successful assembly gathering next week.

I am also writing to ask the assembly to add the Holy Land Christians to their prayers and press releases when speaking of Christians in the Middle East.  When the Christians in the Holy Land see Orthodox statements calling for peace, justice and reconciliation in countries such as Syria, Egypt and Iraq they feel forgotten and ignored by their Orthodox brothers and sisters abroad, whose support and understanding of their situation would be greatly appreciated.

My family and I have been living in occupied Palestine for over twenty years in the Christian village of Taybeh outside Jerusalem.  We have no freedom of movement, need permits for everything, deal with restricted roads at hundreds of checkpoints, are isolated by a separation barrier and have no control over our water supply.  We are last-class citizens in the land of our Lord’s birth.  It is vital to help maintain the Christian presence in this sacred Holy land even in small numbers, so the assembly’s prayers for us and inclusion in press release statements would be greatly appreciated.

I am also in shock over the fifty days of war in Gaza.  Among the over 2,000 Palestinians killed were members of our extended family:  first cousin Jalileh, whose  home was bombed and son, Jeries (George), who was burned over 80% of his body with  both his legs cut off.   There were similar life-time injuries for over 10,000 people in Gaza, mostly children and women.

In addition, this month Israel announced the biggest land grab in the West Bank in twenty years:  1,000 acres of Palestinian land will be confiscated in the Bethlehem area for more illegal settlements–even the U.S. government has denounced this illegal action.  I pray the Assembly of Bishops will do the same.  Please support Kairos Palestine (www.kairospalestine.ps/).