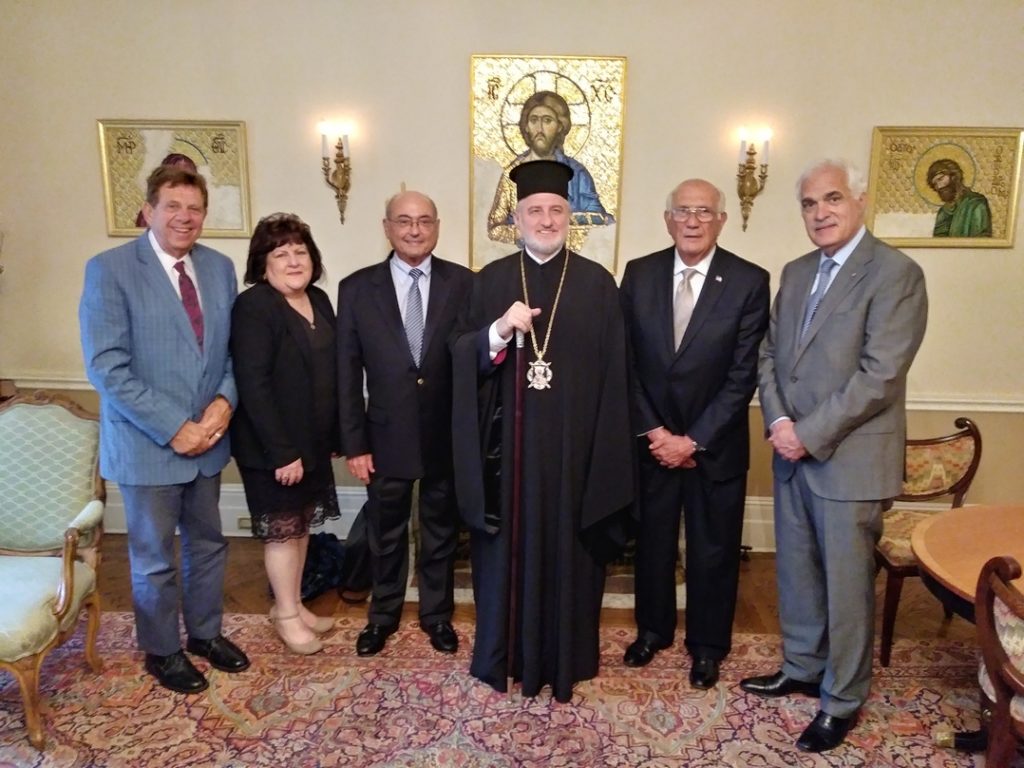 We greatly appreciate the privilege of meeting with you on July 31st, so early in your ministry to the Church and its people here in America.

We all felt that this was a most collegial and constructive meeting. We appreciated your openness and desire for us to be candid with you in return. We thank you for your hospitality. We thank you for this welcoming atmosphere. We look forward with great hope for the opportunity to work with you in what is most important to all of us – the spiritual health of our Orthodox Church in America and its ability to lead its people to a godly life on earth, and eventually to God himself.

Your receptiveness allowed us to present to you the issues that are most on our minds. We believe you heard us with understanding and have an accurate picture of who we are and what we believe. Allow us to summarize the issues that we deem most central to our organization and its beliefs. We feel that these issues are also the ones that are the most important for the health and future of our Church.

Forgive us for repeating much of what you heard in our meeting, as well as the length of this letter, but we believe every point we raised then, and here, merits attention.

31 years ago, Orthodox Christian Laity (OCL) was founded as a lay ministry by a diverse group of like-minded Orthodox Christians – people who had been active all their lives, often in leadership roles – in their respective parishes. The organizers of OCL intended nothing new, but rather a proper restoration of the historic role of the laity as established by Orthodox tradition, practice, and canon. No one doubts that the role of the laity had diminished in America over the years. OCL felt then and still believes that this diminution is to the great detriment of the Orthodox Church in this country, to its health, and to its future.

Most of the founders of OCL have gone to their eternal rest. Theirs is often called The Greatest Generation. We heartily agree with that characterization, not because they fought oppression in World War II – though many of them did – but because they were the generation that inherited the fledgling Orthodox Church in this country from their immigrant parents. They then built it into a powerful part of the American spiritual landscape, inspiring and creating its many institutions – schools, choirs, GOYA, Philoptochos chapters, and a myriad of other worthwhile ministries. Today’s OCL leaders share their view of the importance of OCL’s mission and goals. We are pleased that all jurisdictions of Orthodoxy in America have contributed to our ranks. We are blessed to have several hierarchs and senior clergy – providing spiritual guidance and leadership on our Advisory Board.

In accordance with the overall mission of laity participation in guiding the path of our Church, OCL has consistently set out specific goals:

1. Achieving maximum transparency and accountability in Church administration and governance, with meaningful participation of both clergy and laity.

2. Achieving, as soon as possible – and before it is too late – the unity of all Orthodox Christians in the territory of the United States under a single synod of all canonical bishops. The current existence of fourteen, separate, overlapping jurisdictions, with multiple bishops claiming jurisdiction over the same territories, based almost exclusively on ethnic origin, surely violates the canons of the Church. Just as surely it guarantees a bleak and diminishing future for Orthodoxy in America.

3. Working steadfastly with our clergy leaders for the spiritual renewal of the Orthodox Church in the United States, thus fulfilling the great commission of Pentecost of bringing the message of the Christian Church – when it was still undivided and undoubted – to the American nation.

We recognize that the challenges facing our Church in America are great and require far-reaching reforms and systemic changes. Some are unique to the GOA and require urgent attention. Many must come from the Assembly of Bishops, which was authorized by all of the Autocephalous Churches more than a decade ago. The seminal charge given to the Assembly remains unchanged. It is to “present a plan to bring the Church in America into canonical order.” As Archbishop of the Greek Orthodox Archdiocese of America (GOA), Your Eminence will preside over the Assembly. Under your leadership, we pray that the Assembly will actualize the vision of Patriarch Bartholomew, who has said:

“…the time has surely come for us to move beyond words to actions. We know much better than what we actually do. We are called to put our theory and theology into policy and practice. We are called to move beyond what is ‘mine’ and what is ‘yours’ to what is ‘ours.’ From now on, this is how we should conceive and conduct all of our ministries and resources, all of our departments and initiatives. Otherwise, we do not practice what we preach. It is really up to us to accept the challenge or to refuse the call.”

OCL believes that the primary responsibility of the Assembly is to the faithful and the Church here in America. At the same time, it should be recognized everywhere that a united, growing American Orthodox Church can better support the Churches in the old world, both materially and politically. A stronger, larger, more unified American voice can support the existence and prosperity of the Ecumenical Patriarchate, as well as the Patriarchates of Antioch, Serbia and others throughout the world.

OCL opposed the dismemberment of the Archdiocese into Metropolises which diminished the position and territorial jurisdiction of the Archbishop. OCL believes these changes to the Charter have been detrimental to the unity of the Archdiocese. We do not understand an Archdiocese without Dioceses. To restore the unity of the Archdiocese, OCL believes that Diocesan Bishops should commemorate their Archbishop by name and rank, so that the faithful during every Divine Liturgy and holy service will know their Archbishop. The survival of the GOA depends upon the restoration of trust in the institution among the laity. A return to Archdiocesan centrality would contribute to this restoration of trust, while we continue our work towards American Orthodox unity. Restoring the position of the Archbishop means that leaders of the OCA, Antiochians, Serbians and others would not have to consult with eight Metropolitans to discern the position of the GOA.

OCL believes that Hierarchs who are ineffective or failing, must not be allowed to stay in place until they die or retire after much contention, controversy, and institutional harm. The Metropolis of Chicago and the Archdiocese are examples of this.

OCL believes that fundamentalism has been introduced, infused, and is now slowly becoming the public identity of the Archdiocese. Followers of Elder Ephraim and the monasteries he has established under the Omophorion of the Archdiocese are now found throughout the infrastructure of the Church. The damage done is irreversible to those who have left the Church. The GOA is shrinking. It is in an existential crisis as an institution. The Archdiocese Monastery Regulations, issued by the Holy Synod of the Ecumenical Patriarchate, place upon the Metropolitans the duty to supervise and regulate the Ephramite Monasteries in their Metropolises. They have failed or refused to do so. OCL believes that the Regulations must be strictly followed, both as to financial transparency, but more importantly with respect to heretical teachings of “theologoumena,” such as Toll Houses, abusive confessions, and competing with Parishes for sacraments, claiming that baptisms are more valid in monasteries than in Parishes, to name a few divisive examples.

OCL is a leading advocate for restoring the voice of the laity by endorsing changes to the Charter and Regulations, including, but not limited to, removing impediments to Parishes submitting agenda items for inclusion at both Diocesan (Metropolis) Assemblies and Biennial Clergy-Laity Congresses.

OCL believes that active lay participation in Church administration and governance means that Ecclesiastical Courts must include laypersons (both male and female), and procedural due process must be provided for both the accuser and the accused. It also means that both the clergy and the laity must have meaningful voices in the selection of their hierarchs.

OCL believes that Orthodox hierarchs tending to the “vineyard God has planted with his right hand” here in America must understand and love America. The American Constitution guarantees all citizens the “free exercise of religion.” It also prohibits the “establishment” of any religion by the State. America is not Turkey, Greece, Russia, Iran or any other country where the State establishes one religion, and often suppresses others. This separation of church and state means that Orthodox hierarchs in America are not “Ethnarchs” representing the faithful under their care in the halls of Congress or the Executive Branch. While hierarchs and the Assembly of Bishops have the right and duty to speak out on moral, ethical, and theological issues, their duties do not include meetings with foreign political and military leaders or lobbying the U.S. Government on “national issues” relating to other countries. The very visibility, frequency and publicity of such meetings are antithetical to the principles of church-state separation that are a hallmark of American society, to which our Church must adhere as well.

As faithful Orthodox Christians and as Americans, OCL believes that Orthodoxy is a part of the religious fabric of America. We believe that we must devote all of our energies to growing Orthodoxy in America. If Orthodoxy in America is to grow, it must be a missionary church, reaching out to everyone who is seeking the true faith, and re-evangelizing those who have left the Church. Orthodoxy claims to be “One, Holy, Catholic and Apostolic.” In America, the Orthodox Church, divided into fourteen ethnic jurisdictions, does not present itself as “One.” Separated by ethnicity within the territory of the United States, neither can our Church claim that it is “Catholic.”

Finally, OCL is gravely concerned with the dire situation facing Hellenic College and Holy Cross. The future of Orthodoxy in America depends upon a world-class School of Theology to train the clergy and hierarchs who will lead the Church. Consideration should be given to closing Hellenic College and focusing on Holy Cross. Our candidates for the priesthood – and their eventual parishes – would be better served in many ways if our young men earned a bachelor’s degree elsewhere, before entering the seminary. The idea of merging Holy Cross with St. Vladimir’s should be carefully studied and pursued, with an eye towards academic excellence, as well as Orthodox communion and unity. Fr. Frank Marangos has prepared an excellent treatise on Theological Education. We were happy to deliver a copy to you and pray that you will give it your personal attention. OCL supports the reforms necessary to ensure that Orthodoxy in America will be served by clergy and hierarchs who are as well-prepared as possible.

Your Eminence, OCL acknowledges that the Archdiocese which you have been charged to lead in America is confronting existential challenges. OCL pledges its support in addressing those challenges in a spirit of syndiakonia – mutual love and co-ministry. We and all our supporters look forward to assisting you as you embark upon your ministry. We are dedicated to supporting you in bringing about all that is needed to help Orthodoxy grow in America. This is a sacred trust, to which we pledge our hearts, souls, and greatest efforts.

Respectfully submitted, on behalf of the Orthodox Christian Laity,